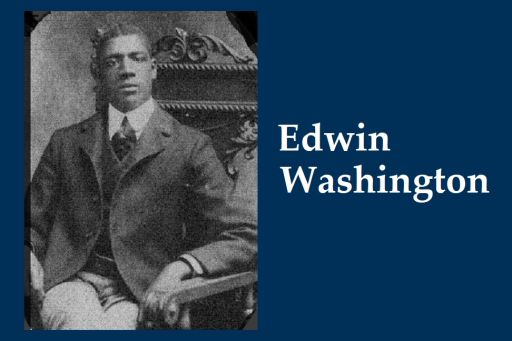 In 1890, William Washington and his family moved to Southborough, becoming the first free Black residents of the Town. The son of an African from Ghana who had escaped enslavement and married the daughter of a free Black woman and her Dutch sea captain husband in New Jersey, William became the assistant sexton at St. Mark's Episcopal Church and found full employment at Deerfoot Farms, in both roles working directly for St. Mark's School founder Joseph Burnett. The Washingtons lived in a house at the northwest corner of Southborough's Main Street and Marlboro Road (the location of the current Southborough Public Library).

In 1903, William's 24-year-old son, Edwin (pictured at right, was appointed head steward at St. Mark's School, responsible for all non-academic purchases at the School and assisting the treasurer of the SM Board of Trustees as the School's de facto business manager. As far as the students were concerned, however, Edwin Washington's most important role was his direction of the School kitchen and dining hall. It was under Washington's stewardship that a fully-equipped St. Mark's bakery was put into operation as he oversaw the updating of the building's cooking and food storage facilities. He also introduced hot dogs to the St. Mark's menu.

The following year, with assistance from headmaster William Greenough Thayer, Mr. Washington was able to move into a house at the end of School Street, near Marlboro Road, with his new bride, Frances Chesnutt Washington, and their growing family. Dr. and Mrs. Thayer were often guests of the Washingtons for a casual supper, and the headmaster would also drop in on his steward for a consultation about the physical plant over a cold glass of lemonade on hot afternoons. Edwin Washington's brother, Fred, also worked for the Rev. Thayer, succeeding his father William as sexton at St. Mark's Church. Sponsored by both Dr. Thayer and Bishop William Lawrence, Fred Washington would go on to achieve his dream of becoming an ordained Episcopal clergyman.

Sadly, Edwin Washington died in 1916, at the age of just 37. His widow and children would move to Westborough. Daughter Ella would become the first student of color to graduate from Westborough High School. Dr. Ella Washington Griffin would become a renowned expert in the field of international education, serving both the U.S. Department of Education and the United Nations over a distinguished 40-year career.