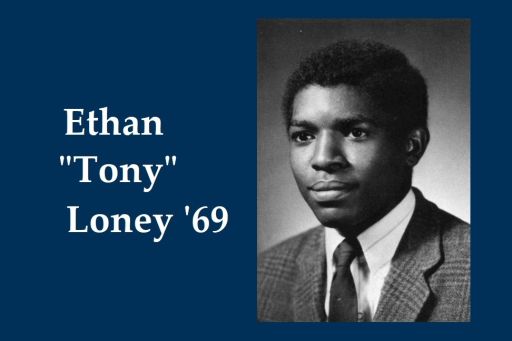 In June of 1969, Ethan Anthony "Tony" Loney became the first African American student to graduate from St. Mark's. He arrived on campus in the fall of 1965. "It was certainly eye-opening to me," remembered Loney, some years later. "I had just left a junior high school in Brooklyn with 3000 students, predominantly black and Latino. Now I was at this small school, where everyone knew everybody else: predominantly white, and socio-economically so different from my own background." Unlike today, there was no orientation or training, no emphasis on diversity, and no institutional attempt to understand or address the challenges facing new St. Markers. "The school had no clue. It's like you were dropped into a war zone to fend for yourself." Still, while Loney recalled a few condescending comments and inappropriate epithets, "there was no hazing. The first year was a little tricky, but after that it was a no-brainer."

A "no-brainer" perhaps, but not ever easy. "I was not prepared for classes the way they were at St. Mark's," he admitted. Sports, he said "normalized the experience for me." He played football, basketball, and baseball as a Lion. Loney credited young faculty member Henry Large with smoothing the way for him and for a number of other Black students who followed his path to St. Mark's. St. Mark's, Loney would later say, "was the best experience of my life. It made me grow up fast and helped me to learn about human nature. It was also a great education, preparing both for the college workplace and the challenges of life."

In addition to his athletic endeavors, Loney was a Prefect, a volunteer Brantwood counselor, and the recipient of the Douglas H. T. Bradlee Scholarship Prize[1] (for "firm, forthright moral courage" and "spiritual strength"). He would go on to attend Trinity College. From there he went into the business world, working as a human resources manager at Aetna for 18 years. The most important lesson he learned starting out, he would later recall, was that "sometimes your harshest critics are the ones you really need to listen to."

For more than two decades, Tony Loney served as vice president of diversity and inclusion at NBCUniversal, where he played a significant leadership role in making that company's approach to diversity and inclusivity a model for the communications industry. He helped redesign the company's approach to internships and to employee and leadership programs, to increase diversity in each of these arenas. Loney was instrumental in implementing the network's diversity initiatives. More recently, he helped develop strategies that address diversity initiatives and worked to facilitate NBCUniversal's competitive internship program, reflecting that company's commitment to celebrating "diverse cultures and backgrounds by presenting positive role models, telling diverse success stories, commemorating heritage, and fostering dialogue on a variety of platforms, to create powerfully engaging content that makes a real difference in people's lives." He follows the philosophy "that diversity fosters new ideas—and new ideas are the engine of success." In no small part thanks to Loney's efforts, NBCUniversal earned a number of awards for its commitment to diversity and inclusion, including being named as a "Top 50" organization by Diversity Inc.

Loney strives for excellence in his volunteer work as well. He is a member of the National Association for Multi-Ethnicity in Communications (NAMIC) Diversity Roundtable. This group of 20 senior executives in communications companies shares best-practices for increasing diversity in the cable/telecommunications industry. Loney is also a board member of the Urban League of Southern Connecticut and has not only served as both its secretary and its chair, but also was recognized in July 2014 as its Board Member of the Year.

And Loney never forgot his St. Mark's legacy. He has remained involved, sharing his thoughts on diversity, inclusion, and life choices. In 2013 he was the opening speaker for the first St. Mark's Career Day and led an on-campus workshop. Subsequently he has hosted students at NBCUniversal, helping St. Markers experience a glimpse into the communications industry.

In 2017, Tony Loney was inducted into St. Mark's Cloister of Distinguished Alumni/ae.