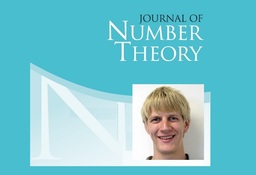 The newly established David Goss Prize will be awarded every two years to a mathematician under the age of 35 for outstanding contributions to number theory. The prize is dedicated to the memory of David Goss who was the former editor-in-chief of the Journal of Number Theory.

Smith, who is expected to receive his Ph.D. later in 2020, has made very impressive contributions to number theory and arithmetic geometry. His work touches a wide range of topics such as the Selmer groups of elliptic curves, the class groups of imaginary quadratic fields, the congruent number problems, and the Birch and Swinnerton-Dyer (BSD) conjecture.

He went from St. Mark's to Princeton, where he began his impressive research achievements with his senior thesis, written under the supervision of Dr. Shou-Wu Zhang (Princeton's Institute of Advanced Studies). A congruent number is a positive integer which is the area of a right triangle all of whose sides have rational number length. In his thesis, Smith proved that at least 55.9 percent of all square-free numbers are congruent numbers. This was the first positive density result obtained for the congruent number problem. The problem of determining which numbers are congruent goes back to antiquity. Smith's proof was based on the study of 2-Selmer groups of the congruent number elliptic curves following previous work of Heath-Brown-Monsky and Tian-Yuan-Zhang. Smith also had two other research papers published while a Princeton undergraduate.

As a graduate student at Harvard, under the direction of award-winning mathematician Dr. Noam Elkies (National Academy of Sciences), Smith went significantly beyond his senior thesis by studying the 2∞-Selmer groups of all elliptic curves with full 2-torsion. He proved that the 2∞-rank is distributed according to the Delaunay heuristic. Under the BSD conjecture, Smith's result implies the famous Goldfeld conjecture for the distribution of analytic ranks of quadratic twists of such elliptic curves. As a byproduct, Smith also proved that the 2∞-rank of the class groups of imaginary quadratic fields are distributed according to the classical Cohen-Lanstra heuristic.