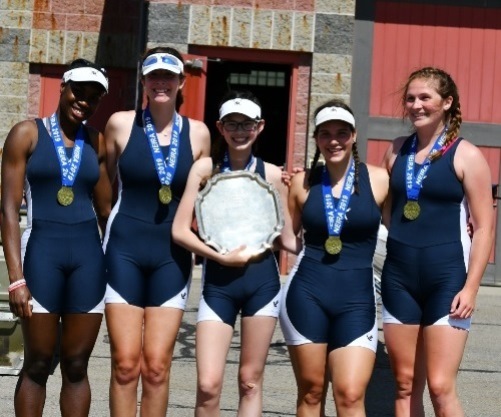 At the 2019 New England Interscholastic Rowing Association (NEIRA) Regatta on May 25, five St. Markers once again wore gold, as the SM girls' varsity crew 3rd boat came in first place. With a time of 6:18.351 over the Lake Quinsigamond course in Worcester, the Lions defeated Choate, Taft, Winsor, Nobles, and Deerfield in their Grand Final race. It was the sixth championship finish for St. Mark's girls' crew program in its 41 year history. That same day, the SM girls' varsity 4th boat placed second in their Grand Final race, earning the 18th medal in the history of the program.

Rowing was the very first spring season varsity sport for girls established when St. Mark's went co-ed in the autumn of 1977. The girls' varsity crew was founded and organized by faculty member Andy Harris. Mr. Harris had been teaching English at the Southborough School for girls, which was coordinated academically, artistically, and socially with St. Mark's from 1972-1977. Harris also coached JV crew at St. Mark's, and was the first to introduce a female coxswain to that all-male program. In May of 1977, with the prospect of combining the two schools now a certainty, coach Harris took a group of Southborough School students out on the water to give them a live, in-person sense of what the sport of crew entailed. Mr. Harris realized that coeducation would make necessary expanded athletic offerings, and those girls would form the nucleus of a new spring sports opportunity the following year.

Andy Harris served as the team's head coach for 35 years, and four times his crews medaled at the national rowing championships. In 1988, the St. Mark's girls' varsity crew 1st boat won the New England championship and the following year St. Mark's took the Gold Medal at the Nationals. The 1989 St. Mark's girls' varsity crew was the School's first (and is to date its only) national championship team in any sport. The 1989 SM girls' 1st boat was that year's dominant New England crew, winning all of their regular season races by an average of sixteen seconds—about four boat lengths—and also winning the Founder's Day Regatta.

Eight times Coach Harris' first four medaled at the NEIRA end-of-year regatta on Lake Quinsigamond. Many of his rowers have gone on to collegiate and even national prominence in the sport. Coach Harris, Senior Master at St. Mark's since 2010, retired in 2015 after 41 years in Southborough. He was only the third coach in St. Mark's history to amass more than 300 victories in a single sport. In 2016 he was inducted into the School's Athletic Hall of Fame. 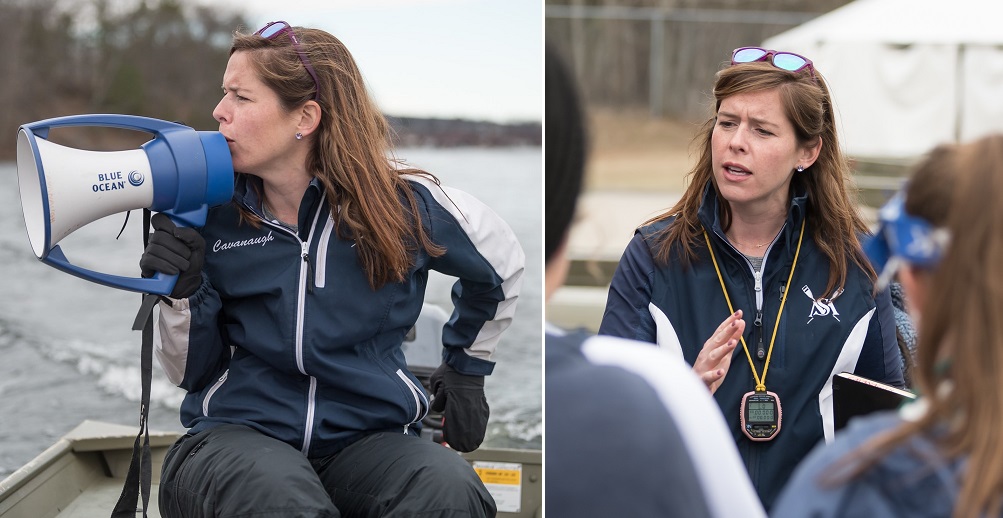 Harris was succeeded as head coach by one of his rowers, Liz Cavanaugh, St. Mark's Class of 2004. Cavanaugh was a Division I rower at George Washington University, stroking two Atlantic 10 Conference Championship crews and earning team MVP honors. She returned to St. Mark's in 2010, taking up a position in the Admission Office and becoming an assistant coach under Mr. Harris. Cavanaugh was named head coach in 2013. In her seven seasons at the helm of St. Mark's girls' crew, she has posted an overall record of 77-23-16, including the program's best ever racing record, 15-1-1 in 2016, and its highest overall NEIRA team finish, second place. She has coached the varsity team to eight NEIRA medals: four gold, two silver, and two bronze. Her crews have qualified for both the USRowing Youth National Championships and the National Schools' Championship Regatta. She has also coached three crews in the Head of the Charles Regatta, in 2015, 2016, and 2017.

This year's team posted a final regular season record of 11-4-3, looking strong in both DuPont Cup and NEIRA Regatta competition. The program is graduating three seniors—Kate Normandin, Haley Dion, and Hannah Hassara—from the varsity, and three more—Kennedy Petties, Kerrie Verbeek, and Daniela Martinez—from the JV boats. Currently, seven veterans from Ms. Cavanaugh's crews are competing at the college and university level, and two of them—Claire Benning '15 (Brown) and Desmond Goodwin '16 (Harvard-Radcliffe)—qualified for the NCAA rowing championships this year. This is the ninth year in a row that St. Mark's alumnae have been represented at the NCAAs.

"Coaching the girls' rowing program is truly an honor and something I care very deeply about," says Liz Cavanaugh. "While each year my two main goals are to teach the girls how to be the best technical rowers and to put out the fastest possible crews at NEIRA's, coaching this team is so much more than that. I have learned to adjust my coaching strategies each year to maximize the potential of the group we have in that particular year. Together, as a team, we learn how to work together, push each other, and achieve goals. I have seen the overall level and performance of this team grow each year I have been coaching, and I attribute that to the work ethic and confidence of each of the girls on the team. Each year, they want to be stronger and more successful than the previous year, which allows me to continue to push their limits and instill in each of them as much confidence and mental strength as I can teach them. Although we are one of the smallest schools within the NEIRA league, our continued success has come directly from the work ethic and dedication from each of our girls, which makes me the proudest coach in the league."

Congratulations to Coach Cavanaugh and all her rowers for so successfully carrying on the successful legacy and rich tradition of girls' rowing at St. Mark's. 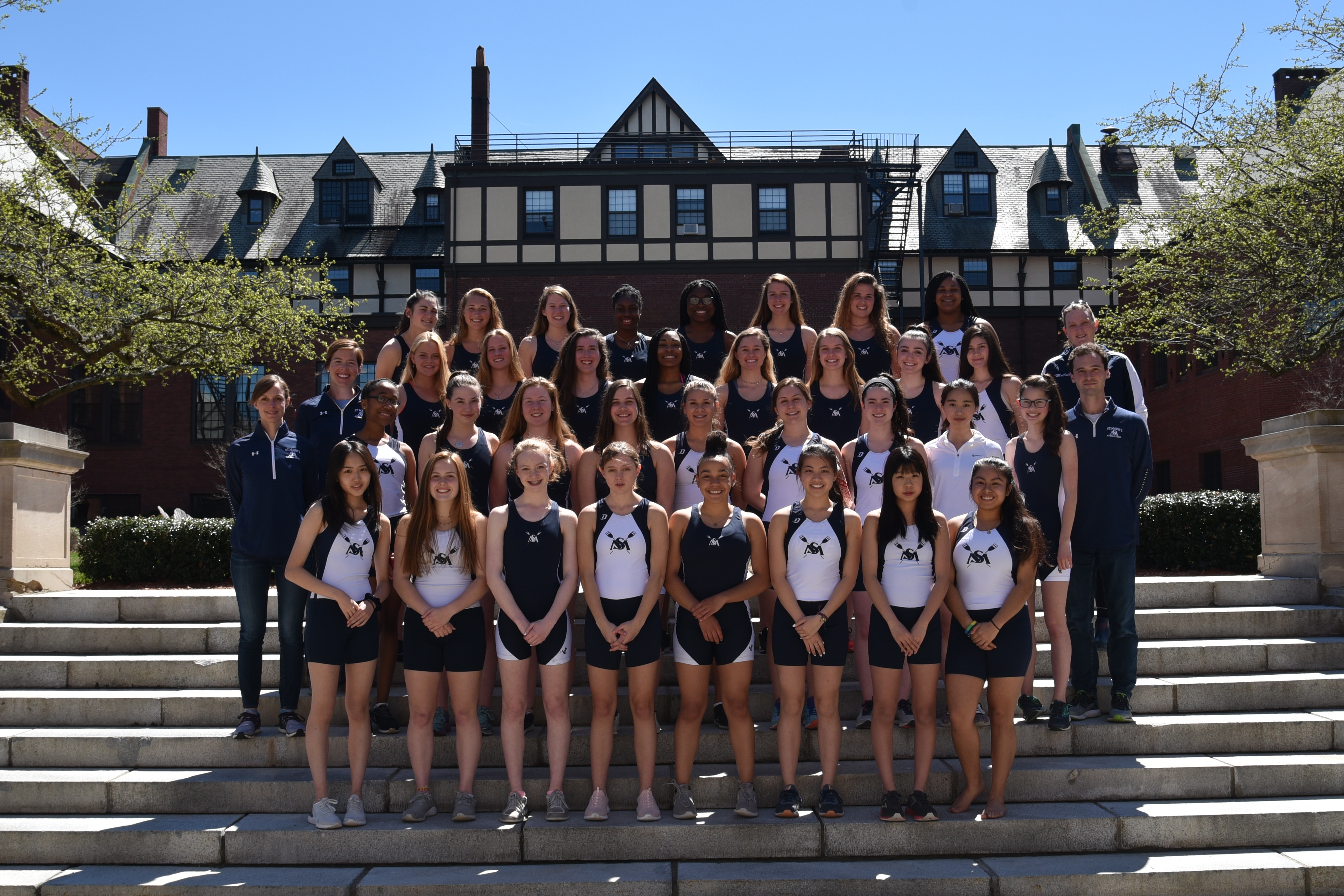