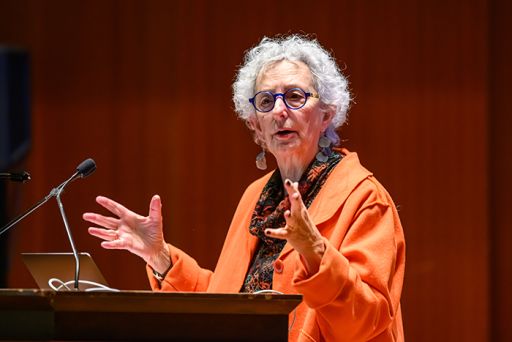 On January 12, Dr. Susan Reverby addressed the St. Mark's community as part of this year's "Conspiracies and Consequences" Gray Colloquium Speaker Series. At Wellesley College, Dr. Reverby is McLean Professor Emerita in the History of Ideas and Professor Emerita of Women's and Gender Studies.

As "a historian of American health care," Reverby's research has centered on women's health, women as health workers and professionals, and the ethics of public health and research. During her visit to campus, she spoke to St. Markers about the infamous "Tuskegee" syphilis study—a 40-year (1932-1972) U.S. Public Health Service research study "in which African American men were deceived into believing they were being treated, not monitored, for their disease." Her talk focused on the conspiracies and consequences of "Tuskegee" and bioethics.

"When a bad thing happens, we want to understand who did it and why," Reverby explained in her opening remarks. "We often need to recognize the horror in order to recognize what's good."

The stated purpose of "Tuskegee" was to see if penicillin would work to treat syphilis, but the African American men living in Alabama's Macon County were actually given aspirin during the study, and told it was a treatment for "bad blood." In researching this troubling study and others throughout American history, Reverby has noted how "medical melodrama" contributes to conspiracy theories. For example, "Tuskegee" became an "American allegory of the dangers for each time we place our lives in the hands of public health officials and doctors."

This allegory continues to perpetuate conspiracies today. For instance, references to "Tuskegee" during the COVID-19 pandemic kept many Black Americans from getting vaccines. According to Reverby, the Voices for Our Fathers Legacy campaign worked with some of the men who were subjects in "Tuskegee" to combat the conspiracy and misinformation and encourage vaccination.

Racism works its way into medical research, acknowledges Reverby, who is currently working to get medical students to understand this reality. "We need to understand why these studies happen in the first place," she said, and views historians and scholars as critical to explaining the complexities of these studies to the public.

"You can't only think it's the bad guys," Reverby told the St. Mark's community. Normative behavior is also to blame. And an apology only acknowledges the wrong; it does not change regulation and policy moving forward.

Reverby edited Tuskegee's Truths: Rethinking the Tuskegee Syphilis Study (2000) and subsequently wrote a book on the study, Examining Tuskegee: The Infamous Syphilis Study and Its Legacy (2009), which won three major academic awards. She was also part of the Legacy Committee that led to President Clinton offering a federal apology for this study in 1997. Her latest book, Co-Conspirator for Justice: The Revolutionary Life of Dr. Alan Berkman (2020) is a biography of a global health physician who fought to get antiretrovirals for HIV/AIDs into Global South countries in the early 2000s and helped to shape U.S. policy.