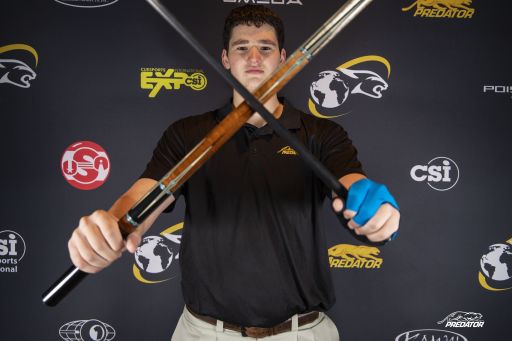 Just four years ago, Eli Zahavi '24 was leaving the Billiards Cafe in Ayer, Mass. with his family when a flyer advertising a Sunday pool league caught his eye. On a whim, the then 11-year-old decided to give the league a try. Fast forward to today, and the now 6' 6" St. Mark's day student from Westford, Mass. is playing in big-time pool tournaments around the country.

At the 2021 BCA Pool League World Champioinships, held at the Rio All-Suite Hotel and Casino in Las Vegas, Nev., Zahavi competed for seven days against seasoned adults in 9-Ball Singles, as well as teenagers in Junior 9-Ball Singles and Junior 8-Ball Singles. The event, run by BCA's parent company CueSports International, was postponed from March to September due to the pandemic and featured approximately 5,500 players and 300 pool tables.

In the Junior 9-Ball Singles, Zahavi won his first two matches. He then lost a match to the player who ultimately placed first. "It was a close match," Zahavi said. "I was one ball away from the win." In the end, after a double elimination, Zahavi placed ninth out of 40 participants. The highlight of the tournament for him was achieving his first ever "break and run"—a term used to describe when a player breaks the racked balls, pockets at least one ball, and then continues to pocket the remaining required balls without the opponent getting a turn at the table.

So, how did Zahavi become so accomplished in such a short time? He is quick to credit coach Roy Pastor, an Ayer, Mass. attorney and the only master instructor in the state according to the Professional Billiards Instructor Association. Pastor, who has been teaching young players the game for more than 20 years, was awarded the PBIA Jerry Briesath Instructor of the Year Award for 2020. He has coached Zahavi from that very first day at the Sunday pool league and now has a place called the Red Dragon in Harvard, Mass., where Zahavi continues to play most Sundays. He also practices for one to four hours a day, every day, even in the summer.

Playing in national and world championship tournaments has afforded Zahavi an opportunity to watch professional pool players in person. He admires Shane Van Boening and Efren Reyes, otherwise known as "The Magician." In fact, just like many of the pros, Zahavi is sponsored by Predator Cues as a member of their junior team. "Predator Cues aims to inspire the next generation of pool players through innovation and grow interest in the sport by sponsoring junior professionals," explains Predator Group's Photo and Video Content Creator Kyle Theodoridis. Zahavi's sponsorship began at the end of his eighth grade year, and Predator continues to supply him with gear.

In addition to his coach and sponsor, Zahavi is especially grateful to his mother and manager Mari Cartagenova. From organizing travel arrangements to updating her son's Facebook and Instagram accounts, Cartagenova handles all things related to Zahavi's pool playing and travels with him to events. She is quick to deflect any credit for his success, and like her son, praises coach Pastor for volunteering his time and sharing his passion for pool free of charge with any teenager who wants to learn the game: "We are fortunate that one of the best coaches in the country lives in our area."

The next BCA World Championships is scheduled to take place again in Las Vegas in March, and Zahavi is looking forward to the competition. He also has his sights set on qualifying for the Billiard Education Foundation's Junior World Championship, which moves from country to country each year. In the meantime, Zahavi continues to participate in weekend tournaments and enjoy life as a student at St. Mark's.

It may come as no surprise that his favorite subjects are physics and math, both of which have proved useful as a pool player. According to Zahavi, "Geometry class helped with the angles!" In addition to playing pool, he enjoys football, wrestling, and baseball. His favorite part of St. Mark's is the people, and his favorite teacher is Mr. Bauer. There is just one small problem: the School does not have a pool table...yet!