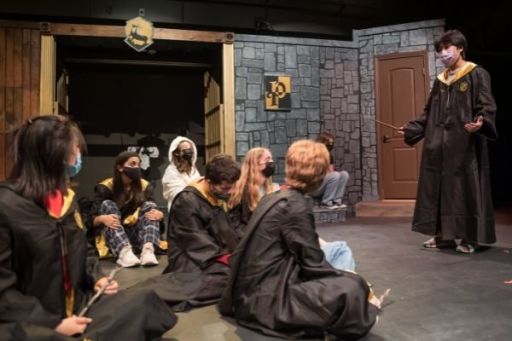 This week at St. Mark's, the Theater Department proudly presents Puffs: Or Seven Increasingly Eventful Years at a Certain School of Magic and Magic, a play by Matt Cox. Performances take place back in the Black Box Theater on November 17, 18, and 19 at 7:00 p.m.

"For me, the Black Box Theater has always felt like home, so it is especially exciting to reopen the space for live performances this fall," says Theater Director Chris Kent. "There is tremendous joy watching actors dash across the stage, hearing the buzz of the lights, and waiting in silence for a moment of climax. To rehearse and stage this show has been an adventure from day one. With over 100 characters to perform, 130 light cues, and 60 sound cues, this is by far one of the most ambitious performances we have undertaken."

According to Kent, Puffs is a clever and inventive play that gives the audience a new look at "seven increasingly eventful years at a certain school of magic and magic" from the perspective of three potential heroes trying to make it through a magic school that proves to be very dangerous for children. Alongside them are the Puffs, a group of well-meaning, loyal outsiders with a thing for badgers. Their hilariously heartfelt and epic journey takes a classic story to new places and reimagines what a boy wizard hero can be.

"The cast and crew committed themselves to every step of the process, and their energy and enthusiasm truly shines throughout the performance," Kent says. "Still, at the end of the day, this is a play about people who feel like outsiders finding their place and their people. There is something heartwarming and universal. The theater has always been my place. We look forward to all who come to see our show and join our people."

To attend the play, please email Mr. Kent at christopherkent@stmarksschool.org and reserve tickets. The show is free, but seating is limited to 100 lucky patrons each night. Preference will be given to those who reserve seats in advance, masks are required for all audience members, and visitors should adhere to the St. Mark's visitor policy. Please note: this play contains profanity, and strobe lights are used in the production.

Welcome back to the Black Box Theater!