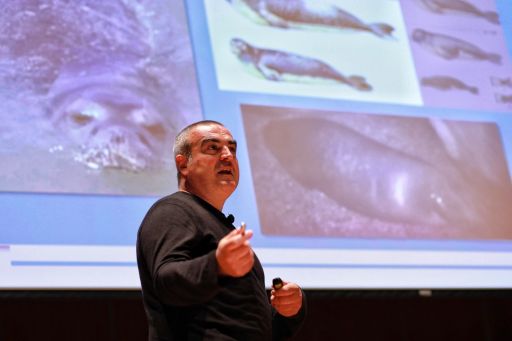 Dr. Luigi Bundone, a multilingual conservationist from Italy who has been partnering with Barbara Putnam and students in her studio art classes, spoke to the entire School community on Thursday, December 2. In his interactive Gray Colloquium presentation entitled "Mediterranean Monk Seal Conservation and Monitoring," Dr. Bundone shared the challenges of research and data gathering encountered by the NGO Archipelagos environment and development team. In their efforts to monitor and protect the sea mammal, this Archipelagos team developed the first systematic photo identification catalogue for the monk seal in Greece.

To those in attendance at the Putnam Family Arts Center's Class of '45 Hall, Dr. Bundone explained how he, along with biologist and Archipelagos founder Aliki Panou and other members of the team, have equipped 15 different marine caves across the Central Ionian Sea with infrared cameras in order to strategically cover the region where Mediterranean monk seals rest and give birth. The flash of the camera is not visible to the naked eye, and the team is careful to avoid interaction and disturbance. They study the monk seals near Albania, Croatia, Greece, Israel, Italy, and the Western Sahara. Thanks to Aliki Panou's years of previous studies and research beginning in 1985, the Archipelagos team has captured about 300,000 images with the cameras in the Central Ionian since 2018.

Dr. Bundone taught St. Markers a lesson in how to identify the Mediterranean monk seals. He then made a game out of showing several of the images captured by the cave cameras and asking students to determine the age and sex of the seals. As students volunteered their best guesses, they quickly learned this was no easy task; however, from the size and proportions of the seals, the combination of their scars, and the coloring of their backs and bellies, Dr. Bundone is more easily able to identify them. "Just look for patterns," he said. "Just look for shapes."

That vision is not unlike what artists look for when creating an image, and in fact, Dr. Bundone has been collaborating with students from Barbara Putnam's studio art classes for more than three years; together, they have discussed the threats to the Mediterranean monk seals' survival and current conservation efforts. In addition, Ms. Putnam and Dr. Bundone, with the support of Dr. Gema Hernandez-Milian (scientific advisor of the Italian branch of Archipelagos), also developed an artistic project on the effects of microplastic pollution in the Mediterranean. All of this work is currently on display in Taft, and the impressive exhibition includes educational posters highlighting the intersections between science, sustainability, and art.

The goal of this collaboration is to fuse together a new common language and express important messages about marine mammal science to the general public. While democracy does not always help conservation, notes Dr. Bundone, it does provide important tools, like a legal framework, to protect the environment. "We need to include environmental protection into these rules to be a civil society—and properly apply them," he told St. Markers.

The marine area the Archipelagos team studies is not yet protected, and they are trying to protect the monk seal's former habitat and population with support from scientific data. "Language is important. It needs to be comprehensive in order to be effective," said Dr. Bundone, emphasizing that communication to the general public is essential in order to reach the ears of policy makers and stakeholders.

Dr. Bundone and the Archipelagos team will continue their conservation efforts and their study of the Mediterranean monk seal because they are focused on doing their part for the survival of the species.

You can read more about the Archipelagos team here and about their conservation efforts with monk seals here.