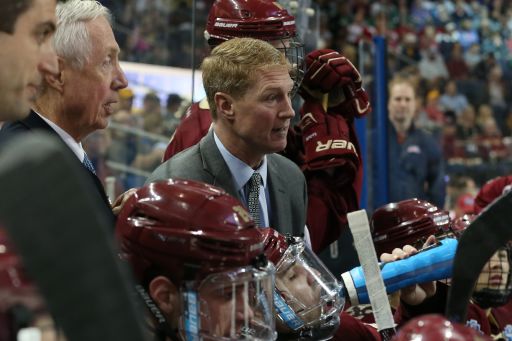 Boston College recently announced that St. Mark's alumnus Greg Brown '86 will return to his college alma mater as the next head coach of the Eagles men's hockey team, becoming only the fifth coach to lead the team in the past 90 years. The son of former St. Mark's math teacher Curt Brown and former school store manager Marge Brown, Greg grew up skating on the frozen ponds of West Campus and routinely followed older brother, Doug '82 (a two-time Stanley Cup winner with the Detroit Red Wings, in 1997 and 1998) to Gardner rink, which was literally next door to the Brown's campus home. During his time as a St. Mark's student, Brown became a formidable defenseman and led the Lions to four consecutive ISL championship titles. He was inducted into the St. Mark's Athletic Hall of Fame in 2006.

At BC, the former Eagles defenseman won Hockey East Player of the Year Awards in 1989 and 1990 and was named a First Team All-American and a finalist for the Hobey Baker Award both years. He was the captain of the men's hockey team as a senior in 1989-1990 when the team won 28 games and reached the NCAA Semifinal. BC went 84-33-5 (.709) during Brown's three seasons, winning Hockey East Championships in 1987 and 1990. In his NCAA career, Brown registered 24 goals and 96 assists for 120 points in 119 career games. He was selected to the U.S. Olympic Team for the Calgary Olympics in 1988 and again for the Albertville Olympics in 1992 and was drafted 26th overall by the Buffalo Sabres in the 1986 NHL draft. Brown played professional hockey during four NHL seasons for Buffalo, Pittsburgh, and Winnipeg, and eight more seasons in Europe, before he retired in 2003.

The following year, Brown returned to BC and spent 14 seasons, from 2004 to 2018, on former BC coach Jerry York's staff, during which time the men's hockey team won three national championships (in 2008, 2010, and 2012). During those years, the team also won seven Hockey East Regular Season Championships along with six Hockey East Tournament Championships, and they made 11 NCAA Tournament appearances and seven NCAA Frozen Four berths. Brown became associate head coach of the team in 2012, and was also selected as an assistant for Team USA at three different IIHF World Junior Championships. From 2018 to 2021, Brown served as an assistant coach for the New York Rangers. This past season, he was the head coach of Dubuque, where he increased the team's wins by 16 over the course of the season and led the Fighting Saints to a second-place finish in the USHL Eastern Conference.

"I cannot be more excited to come back to Boston College, which has been such an important part of my life as a student-athlete, coach, and parent," said Brown. "I am truly honored to be named coach, and to succeed my coaching mentor and friend Jerry York."

On Monday, May 16, there was a press conference at Boston College to introduce Brown. Congratulations, Greg!

Image Courtesy of BC Athletics