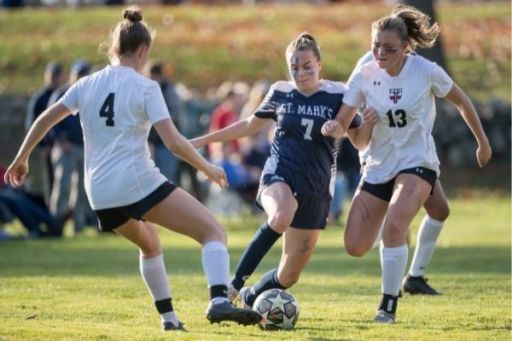 On Saturday, November 13, St. Mark's hosted long-standing rival Groton for the final games of the fall athletic season. After a week of school spirit leading up to eight highly-anticipated home contests, the Lions suffered six losses at the hands of the Zebras.

In the 135th football matchup between the two schools, quarterback Tru Styles '23 stood out in his first Groton Day game, leading the offense and finding several receivers, including Zaki Williams '22, Brendan Peters '22, Guillaume Cote '22, Grady St. John '22, Max Dushney '24, and his top target, Oisin Lee '24. Peters and Lee found the endzone through the air, and St. John rushed for a touchdown on the day. Despite these efforts, the Lions lost 32-19.

Groton also captured wins against St. Mark's boys' JV soccer (6-0) and boys' varsity soccer (4-3). The Lions boys' thirds soccer team pulled off a 1-1 tie. A win was not in the cards for the St. Mark's field hockey teams either. JV field hockey lost 3-1, and varsity lost 2-1.

The Lions' only two triumphs on Saturday took place in girls' soccer, with the JV team earning a 3-0 shutout and varsity winning decisively 4-1. The first goal of the JV game was a tap-in from Thais Jackson '25 after a beautiful cross from Amanda Hyland '22; the second was an amazing 25-yard shot from Annie Painter '25; and the third was another by Jackson, this time from the top of the 18-yard line. "It was a dominant performance," said Coach Rob Bauer. "Maddy Bean '24 and Winn Irwin '25 controlled the midfield on offense, and we shut down their best player on defense. It was the best I have seen them play all year."

The varsity team got out to an early 2-0 lead in the first half of their game against Groton, after an initial goal from Emily Svingen '24 assisted by Sam Galanek '22, followed by a goal by Erin O'Keefe '22 goal on an assist from Carlisle Brush '23. Although Groton played a physical game, St. Mark's did not back down. According to Associate Director of Athletics and Head Coach Lauren Ames, the team remained disciplined and focused throughout the second half. Hadley Gibbons '25 sent a beautiful cross into the box, right to Brush's foot for the third goal. Finally, with under eight minutes to go in the game, the Lions executed a perfect set piece. O'Keefe delivered a terrific ball to the far post, and a perfectly timed run and goal by Svingen put the Lions on the scoreboard for a fourth time.

"After a loss to Groton in the first scrimmage of the year, varsity worked hard to improve throughout the fall," said Ames. "The team had a thrilling finish to their season last Saturday and just missed a bid for post-season play."

Given Groton's victory, the coveted racoon coat will return to the Zebras. The tradition of the coat began in 1989 when, at the close of the 100th football game between the two schools, it was first presented to then-St. Mark's headmaster Chris Mabley by Endicott Peabody, the grandson of Groton's founder. While the coat originally went to the winner of the football game, the custom was later changed and now goes to the school that has the best record overall against the other during the fall season. After Saturday's games, and including previously played games and cross-country meets throughout the season, Groton won the season rivalry against St. Mark's 10-2.

Although it was a disappointing day for the Lions, St. Mark's is still in the running for this year's Burnett-Peabody Bowl. Named for the founders of St. Mark's and Groton, the Burnett-Peabody Bowl was created in 2011and is awarded to the school that has the best overall record in the rivalry during a given year. Let's go, Lions!