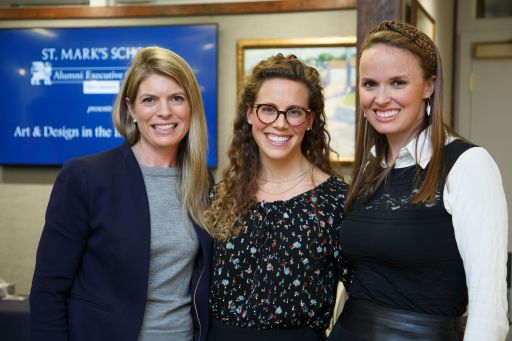 The following article appears in the Summer issue of St. Mark's Magazine. Click here to read the full issue.

Chauncey Pratt Boothby '02, Lucy Grogan Edwards '05, and Sally King McBride '03 have each carved different niches in the art world: Boothby as interior designer and owner of Chauncey Boothby Interiors; Edwards as vice president and jewelry director at Grogan & Company; and McBride as an illustrator and founder of The Letter Nest.

Together, they share common threads. Childhood exposure to the arts. A medium that spoke to them. And inspirational 'art moments' in St. Mark's classes with Art Department Teacher Barbara Putnam.

The three women reunited as panel presenters at an Alumni Executive Committee-sponsored event in January 2020: "Art & Design in the Instagram Age." Following is a glimpse into their abstract worlds.

Chauncey Pratt Boothby '02 was a teenager when her parents gave her the go-ahead to redesign her bedroom. The ceiling popped in a bright blue. An outdoor lantern lit up the closet. Vintage prints from a trip to Hong Kong hung on the walls.

"I had strong opinions and I wasn't afraid to share them," says Boothby, who spent many weekends thumbing through wallpaper books when her parents were redoing a room in the house. "From a young age, they allowed me to take the lead."

Today, she takes the lead with her clients. After graduating from Trinity College with a bachelor's degree in classics and art history, she worked for some of the country's top residential design firms in New York City—including David Easton, Charlotte Moss, Victoria Hagan, and most recently, Ashley Whittaker. In 2016, she founded Chauncey Boothby Interiors, focusing on large-scale residential projects throughout the east coast.

"I worked for a number of firms with very different styles, ranging from traditional to very contemporary," Boothby explains. "I've melded it all together to develop my own design style, bringing mid-century modern pieces into a more traditional aesthetic."

It creates a room with multiple layers. "My clients appreciate the mix and new and old; it is more livable and less like a showroom."

But they aren't the only ones taking notice: In 2018, Boothby was named one of House Beautiful magazine's Next Wave Designers. She is humble about her accomplishments and quick to credit those who have inspired her along the way. Among them is Putnam.

"Barb was always encouraging us to try different mediums and see things in a different way," Boothby says. "She would come up with the most random items for still life; vintage life jackets, old containers, things with a lot of color and texture. I try to incorporate the same level of thinking when using unexpected materials or colors for design clients."

When asked about decorating ideas for do-it-yourself interior designers, Boothby offers practical advice. "I'm a big fan of reusing pieces you have. A fresh coat of paint goes a long way if you have a piece of furniture that is aged. Pick a fun color or add new hardware, and you can turn it into something completely new."

Lucy Grogan Edwards '05 jokes that she inherited an "art history gene," but she may be right. Her parents met while working at Sotheby's auction house in New York City and later opened their own auction house, Grogan & Company, in Boston. Edwards is vice president and jewelry director of that family business and makes appearances on the popular PBS TV show Antiques Roadshow.

"Growing up, there was very little divide in our house between work and family, but in a good way," Edwards recalls. "Pieces would come and go from the house; we would have new rugs or paintings or pieces of furniture."

And Edwards took note. "As soon as I could walk and talk I would ask about the new pieces. I had an eye and an affinity for art, but I never really associated it with a career. It was just part of my childhood."

At St. Mark's, she got approval as a V Former to take Putnam's AP Art History class. Though it was humbling to work among her older classmates and tackle the rigorous curriculum, it was inspiring, nonetheless.

"Sitting in this class, I had heard or read about many of the paintings we were studying," Edwards recalls. "But experiencing it in this academic environment was very eye-opening for me. It was a revelation for me in that it clicked to look at history through the lenses of art."

It clicked enough that Edwards went on to major in art history at Trinity College and then graduated from the Gemological Institute of America. Another revelation came while working for the Jackson Hole Art Auction in Wyoming.

"I discovered that for me, the auction is the most interesting part of the art world," she recalls. "It's engaging because of the pace and turnover that you don't find elsewhere in the art market."

Edwards joined Grogan & Company in 2013 and formally established the firm's jewelry department. A lot of her time is spent on the road meeting with clients to appraise jewelry for potential inclusion in an upcoming auction. This is where her passion for art history comes into play.

"It's grounding to be around objects that are hundreds or thousands of years old and to act as a steward for treasured family heirlooms," Edwards explains. "It's so much more than the value of a piece; it is about listening to stories and preserving history."

Sally King McBride '03 looks natural as she sits in her New York City art studio, dipping her brush back-and-forth from a colorful palette of paints to a mason jar full of water. The intent of her watercolor illustration is simple: "Joy."

"My process is driven by making art for others," McBride says. "My ideas are clear and my expression more effective when there's an intended client in mind."

Among her work: landscapes, house portraits, wedding invitations, birth announcements, and alphabet paintings for children. The latter—born when she wanted to create unique gifts for friends and family who were having babies—became a niche business in YEAR, when McBride launched The Letter Nest. She offers a series of watercolor alphabet and letter paintings, each with a level of detail that combines her rich background in the arts, including 10 years working at the Metropolitan Museum of Art.

Making art is what McBride calls "a natural impulse." She vividly remembers her early childhood drawings: renderings of staged choreography including "elaborate drawings of ballerinas in their final pose" that reflected her love for dance and musical theater.

"It was always art tied to dance or art tied to music," McBride recalls. "I loved connecting one discipline to another."

But the idea of becoming a career artist developed at St. Mark's. "Barb Putnam put a brush in my hand, and I took to it. It came more naturally to me than any of the other mediums that we had been using. I liked the immediacy of it; the fact that you get one shot."

She painted "obsessively," even completing a rendering of the entire St. Mark's campus. Her first professional commission came during her IV Form year: a portrait of her advisor's home.

"Having that validation as a very young person gave me the confidence that I could sell my artwork and set me on a path," says McBride.

Today, she is a successful businesswoman in the art world. "Letting my artwork stand on its own and speak for itself has been the most validating thing that has happened to me."