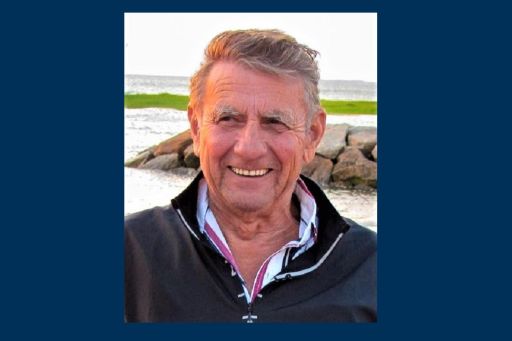 John Mauro, who worked as a member of the St. Mark's staff for a record 58 years, passed away peacefully on Saturday, August 8, 2020 at his home, surrounded by his family. He was 88.

A lifelong resident of Southborough, John attended the former Peter's High School as a member of the Class of 1950. While in high school, he began working on the St. Mark's maintenance staff, under the watchful eye of his father, Joe. This was a family tradition of sorts. Joe Mauro spent 45 years at the St. Mark's, eventually running the School's grounds crew. Joe's brother, John's uncle Charlie, spent 40 years as the School's carpenter. John continued working at St. Mark's after his graduation. He would take a leave of absence from St. Mark's to serve in the U.S. Army, stationed in Germany, but he would return to campus to take up his old job, and would ultimately retire as head of the School's grounds department, after a record 58 years working at St. Mark's.

In 2004, John Mauro was one of the first recipients of the Burr Staff Prize, recognizing exemplary long-term service at the School. He decided to retire in 2009-2010, when began to regard the prospect of driving the School snowplow with reluctance. "I just didn't think I could face another winter," he said. "So maybe it was time to retire." Of John Mauro's unprecedented career, then business manager Bob Meyer noted that "with an ever-expanding number of fields and improved landscaping, John managed to keep everything running smoothly and somehow make St. Mark's look picture perfect. His dedication to our School goes well beyond just being our Grounds Superintendent. He is truly a part of the fabric of St. Mark's and he has the longest tenure of any faculty or staff member in the history of the School."

At a special ceremony, the new maintenance facility at St. Mark's was named "The Mauro Grounds Building" in his honor, with a sign crafted by School carpenter Tom Slocombe. The usually reticent Mauro stepped forward to thank everyone there and to express his gratitude for the tribute.

Reflecting on Mauro's passing, Head of School John Warren '74 observed that "we have lost such a special member of the St. Mark's family. John's depth of caring for our School was extraordinary, truly second to none. That caring was reflected in every aspect of John's work and surely rubbed off on those who worked with him, inspired by the example he set."

John was known by those who knew him as a hard-working, giving, caring and selfless person willing to help anyone. A quiet man, John, had a quick wit, and when he did speak he always had a funny comment. He had a great sense of humor and loved playing practical jokes on his friends and grandchildren. John was a talented craftsman and loved working with his hands tending to his garden and flowers all around his yard; building and repairing boats, and making wooden furniture for his family and friends. His happiest moments were spending time with his family and friends during celebrations, holidays, and around the swimming pool.

He was the beloved husband of Ann "Connie" (Gennari) Mauro for over 63 years.

John is survived by his wife, Connie; his three sons: John, and his wife Ellen of Northborough; Richard and his wife Heather of Salt Lake City, Utah; and Joseph and his wife Wanda of Shrewsbury; as well as his six grandchildren: Vincent, Victoria, Ian, Connor, Mark, and Christian. He leaves his brother William; his sisters-in-law, Angie O'Toole, Rheta Gennari, and Rose Camden and her husband Owen, and many nieces, nephews, and cousins.