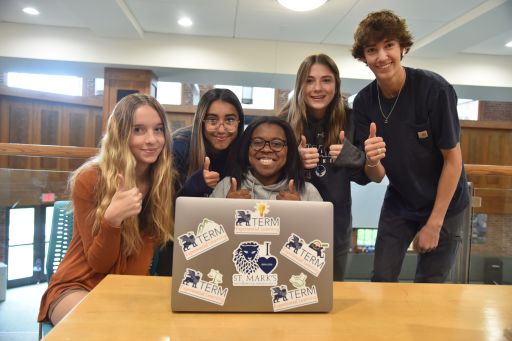 Inside a large red barn at Ironstone Farm in Andover, Mass., nine St. Mark's students along with faculty leaders Anne Behnke and Charlie Sellers are gathered in a semicircle; in front of them are four haflinger horses and two trainers, Renee and Jess.

As birds chirp from the rafters above, Renee demonstrates how to lead the haflingers around the ring. She shows the St. Markers (most of whom have never been around horses) how to position themselves between the eye and ear of the animal. Next, it's up to the students to lead the horses using their body language, voices, and the cues they've been taught. With each lap around the ring, they settle in, grow more comfortable, and gain confidence, all while focusing on the task at hand. This is the beginning of their volunteer training, one of eight days they will spend learning how to guide the Ironstone horses and assist those who come to the farm to ride them: children with autism and veterans who've experienced trauma.

This equine animal therapy class was just one of many Lion Term experiences St. Mark's offered in 2022. The opportunity to get off campus and learn more about this nonprofit organization through firsthand experience as volunteers is at the heart of what Lion Term programming is all about: immersive, interdisciplinary, hands-on, responsive learning.

After a two-year hiatus brought on by COVID-19, 2022 marked a return to a fully in-person Lion Term, the first led by Director of Experiential Learning Jillian Nicks. Each Form was guided by a theme that defined the focus and work of the class. This year's themes were self-knowledge (III Form); community development (IV Form); purposeful action (V Form); and lives of consequence (VI Form).

As in years past, the entire III Form class traveled to Brantwood Camp in Peterborough, N.H. for an immersive experience in nature. The trip focused on development of self-knowledge through identity-building and developing connections with others. "In the spirit of the "Explore, Adventure, Summit" theme of their Lion Term program, the III Formers left behind their phones to spend five days in the company of only each other and 16 hearty faculty chaperones," said III Form Lion Term leader Shelly Killeen.

"Students formed new and stronger relationships with one another, challenged themselves on a low ropes course and Mount Monadnock, and gave back by helping to produce their own meals and clearing trails around the camp," explained Killeen. "Despite consistently rainy evenings, the combination of structured and unstructured time provided the same transformational experience as it did before our two-year pandemic hiatus."

Among the many IV Form offerings around the theme of community development were Black Lives Matter: A Boston Perspective; Immigration to New England Through Cuisine; Empowered Self-Care and Self-Defense; and Women in Leadership.

Lauren Ames, who co-lead the Women in Leadership course along with Colleen Finnerty, explained how students explored a few essential questions, such as: How do we learn gender? How have gender stereotypes created challenges for women over time? Who are strong women in leadership, and what can we learn from them? How can we be strong women leaders at St. Mark's and beyond? Highlights of this Lion Term offering included meeting with Lt. Governor Karyn Polito, P'24, in the State House; walking the road to the vote: the Boston Women's Suffrage Trail in Boston (which Ames pointed out "is not a mapped out or labeled route, but it should be!"); and learning about the history of women's suffrage in this country, particularly the sacrifices so many women made to give other women a voice.

Scott Dolesh, who co-lead the food insecurity course with Veronica Barilla, shared: "Veronica and I had an awesome experience with 13 motivated and engaged V Formers. We continued a relationship with Gretel Anspach and the Marlborough Community Cupboard that has been growing since the inaugural year of Lion Term. This year, we watched a couple of powerful documentaries on food insecurity, and then we spent five days reworking the clothing room at the Community Cupboard. The last day, we were able to help out at the Garden of Giving that Gretel has put in behind her house to help add an additional 3,000 pounds of produce for the food pantry."

In their final days as St. Mark's students, VI Formers focused on individual work under the theme of "Lives of Consequence," tying together the key concepts from all of the Lion Term themes. Just a few of the many VI Form projects were "Changes in Hip-Hop from the 1980s-2022" (Kaleb Washington); "Loving Nature to its Death in National Parks" (Allison Bechard); "Representations of Asian Americans in Media" (Vy Hoang); "Working with African Refugee Youth" (Tatum Forbes); and "Photography's Connection to Environmental Change" (Ewan Leslie).

At the presentation of learning, the culminating event of Lion Term, students shared their newly gained knowledge and lessons learned from their experiences with the entire St. Mark's community, as well as parents and members of the nonprofits and other organizations the School partnered with during these final three weeks of the year. Jess from Ironstone Farm was there, listening as the nine St. Mark's students described what they learned about guiding horses and working with autistic children as part of the Challenge Unlimited program, and what they learned about themselves in the process. By participating in Lion Term, St. Markers seized opportunities to actively contribute to their communities, stretch beyond their comfort zones, broaden their perspectives, and discover the power of purposeful action.