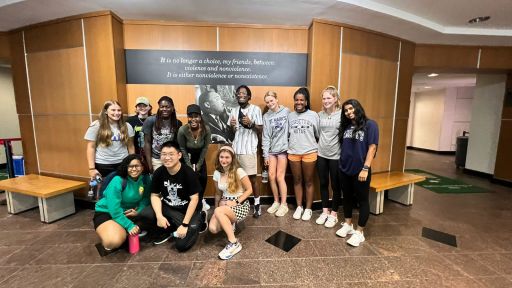 Each year at St. Mark's, Lions Roam courses engage students in rigorous academic and experiential learning, with a connected and culminating domestic or international trip that takes place during Lion Term. Offered in partnership with the Office of Global Citizenship, the Lions Roam program changes annually, and students apply to participate.

In 2022, students in the Lions Roam course engaged in a comparative exploration of race, racism, and reconciliation in the postwar American South and Southwest. The class, co-taught by David Lyons and Colleen Worrell, offered students a deep understanding of two cultures structured around the societal ideas of race and the "other." In the South, the course focused on the Civil Rights Movement of the 1950s and 1960s. In the Southwest, it focused on interactions between the Native American and White communities. During this Saturday course, Lyons and Worrell "sought to impress upon students the cost of living in an "us and them" society and possible paths forward to racial progress." Then, for 12 days during Lion Term, St. Markers traveled with Lyons and Worrell—from Atlanta to Montgomery, Selma to Jackson, Memphis to Phoenix, and Flagstaff to Chinle.

"The trip exceeded my already lofty expectations," shared Lyons. "During my 27 years at St. Mark's, I have brought students on about 40 overnight trips. These journeys have involved athletic teams, classes, and other groups, and all of them were great. However, this one was the best. After a semester of studying the Civil Rights Movement, it was incredible to be able to experience the power of place while standing in the door of the Martin Luther King, Jr.'s Ebenezer Baptist Church in Atlanta, crossing the Edmund Pettus Bridge in Selma, Alabama, or sitting in the Tallahatchie Courthouse in Sumner, Mississippi. In addition, the opportunity to see the remarkable museums and monuments of the region, such as those that the Equal Justice has built in Montgomery, Alabama, was both informative and impactful. Finally, and most importantly, the chance to talk to people who are involved in the movement and its remembrance was invaluable."

After a year of conversations about initiatives regarding race, racism and reconciliation, students completed the course with a better understanding of the complex narratives that are a shared living history. They learned about access to schooling and integration in America, and were able to present all of this new knowledge—from both the Lions Roam course and the Lion Term trip—to their peers at St. Mark's.

The Lions Roam course for 2023 entitled "Pilgrimage in Literature, Film, and Art" will culminate with a Lion Term pilgrimage to Canterbury, England and the Iona Peninsula of Scotland.