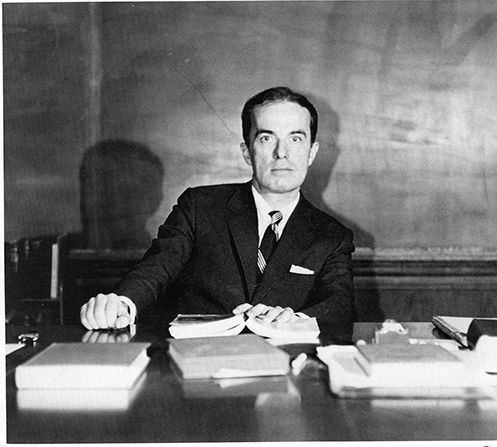 "As many of you know, Bill was an avid Red Sox and Cubs fan," said Head of School John C. Warren '74. "He cared deeply about the well-being of the students and resided in a Main Building apartment during all four decades of his tenure at St. Mark's, overseeing a second floor dormitory. In fact, more than 2,000 St. Markers passed through the School during Bill's time here, and many noted his willingness to listen, his fierce loyalty and integrity, and the depth of his dedication."

"Mr. Glavin has been an inspiration to so many St. Markers, and personally has been one of my most impactful teachers," wrote former student, Greg Ciottone '83. "I long to have those times in his classroom back, where formality equaled excellence (better make sure your tie is high and tight and you're wearing matching socks), and his commitment to teaching was unsurpassed. For those of us in academics now, he has been an unrivaled role model, and the teacher we strive to be."

Bill was a fixture at many of the School's 50th reunions over the years. An endowed faculty chair named after him and fellow Latin teacher, William John Evill—the Evill-Glavin chair—honors his legacy. A dedicated scholar, Bill earned a bachelor's degree in classics from Brown University in 1951, graduating with honors. He also spent summers earning a master's degree in classics from the University of Chicago, and eventually a Ph.D. During his retirement, Bill traveled the world, adding to his vast collection of Greek and Latin books, which totaled more than 3,000 volumes.

In addition to his nephews, Bill and Jim, he is survived by their children Meghann, Wil, Oliver, and Kyle. The School has created a kudoboard for our community to share tributes, photos, and remembrances of Bill, and we are exploring plans for a memorial service during Reunion 2022.