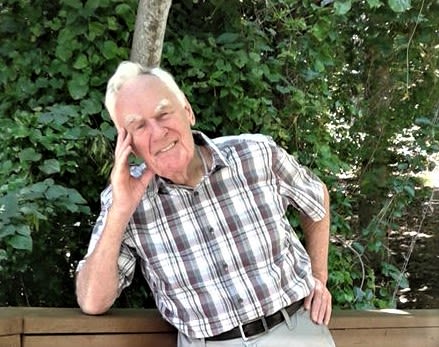 Born in London just a few years after the end of the First World War, he later recalled walking under a railroad bridge up Wimbledon Hill to Queensmere Pond where he said he once swam naked with the swans. He gave himself his nickname as a young boy. Completely disliking his given name, one day he declared loudly: "Mervyn is no more, I am now Robin Redcap! I am Robin Goodfellow!" Thus, with Puck-ish determination, he christened himself Rob.

Rob was in his early teens when, in 1939, the British government evacuated children in London to country areas to escape anticipated (later fulfilled) massive bombing of the city during The Blitz (1940-1941). He remembered bombs shaking the walls. "From Godalming, Surrey, most of us," Rob said, "pedaled our bicycles back to our real homes for occasional weekends. Thirty miles. We got to see Mum and Dad, the pictures shaking on the walls and then pedaled back to our homes away from home."

In 1945, Rob joined the British Army, commissioned into the Royal Artillery and later assigned to the Royal West African Frontier Force (at that time in Eastern Bengal awaiting entry into Burma). During the week that saw Hiroshima and Nagasaki (and the immediate cessation of hostilities), he flew into Burma to join his unit already assembling surrendered personnel on the Burma frontier.

His service from 1945-1947 earned him four years at Christ's College, Cambridge, emerging with a B.A. (later M.A.) degree in English Literature. Rob developed a passion for the humanities, notably Shakespeare and Milton. He set on becoming a teacher "hopefully in interesting environments."

Rob began his teaching career in Bermuda, first at Warwick Academy. In Bermuda, he met and married Joan Michelle Kirkland. Rob and Joan produced Sandy, Jennifer, and Christopher. The latter was born in Bermuda, the other two in New Jersey.

Rob would move on to teach at Bermuda's Saltus Grammar School. At Saltus, he got the nickname "Tex" for confiscating a pair of toy guns from a student. Rob was fond of scuba diving, serving as Captain of Shearwater for Harry Cox and finding the wreck of "L'Herminie" on one memorable day. He also enjoyed recalling a memorable encounter with Jacques Cousteau.

Arriving in Southborough in the autumn of 1961, Rob Weedon would become a pillar of a legendary St. Mark's English department, alongside colleagues like Jay Engel, Lee Gaillard, and Alvin Williams. Distinctive and unique in his pedagogy, Mr. Weedon would enthusiastically teach young III Formers about point of view and the perspective of narrative voice ("Button, button, who's got the button?") and guide older St. Markers through erudite seminars such as "Shakespeare's Use of the Supernatural," "Modern Poetry," and, most famously, "Milton's Paradise Lost." Through it all, he exhibited an exuberant eccentricity, cementing his reputation as a creative and colorful classroom teacher, bringing a zestful energy to the study of English at the School. He was a demanding instructor, treating every student as an aspiring writer. "Forty-five years later," declared alumnus George Frelinghuysen '69 in 2014, "I still remember Rob Weedon trying to get us to unlock the secrets of William Shakespeare through clear and succinct expository writing."

Outside the classroom, Weedon regularly demonstrated his versatility in the truest boarding school tradition. Utilizing his background in repertory theater, he stepped in to direct the service comedy No Time for Sergeants on the Benson stage when Kent Carr, the regular faculty doyen of the Drama Club, was on sabbatical. In the fall, he would "coach" the recreational "JV Joggers" on afternoon runs around Southborough, and each spring, he coached the lower boats during the crew season. In 1969, he accompanied St. Mark's rowers on a memorable trip to England's Henley Royal Regatta. He also became an associate editor of the St. Mark's Alumni Bulletin. He was a thoughtful and insightful advisor and colleague, known for his lively and forthright frankness. He was also an early and committed supporter of coordinate- and co- education.

Perhaps Rob Weedon's greatest extracurricular contribution to the St. Mark's experience was his dedicated advocacy for and leadership of the Roxbury tutorial program. "Most Monday afternoons throughout the year," he wrote in 1981, "you could go down into the basement of St. Cyprian's Episcopal Church in Roxbury and find St. Markers giving individual tutoring in English and arithmetic to first and second grade inner-city children. The task itself is challenging and excellent discipline for our students. Most of us can talk, but talking by itself doesn't bring educational results. These St. Markers are having to learn how to teach. It's refreshing to see our students eager to test themselves in this critical area of meeting and helping others. They seem realistic about it; they know it isn't as easy as it looks." Anywhere from 16 to 30 students participated in the Roxbury program each year from the early 1970s through the decade of the 80s under Mr. Weedon's guidance.

He was always careful to have a life beyond St. Mark's. "The great drawback", Rob once said, "of teaching at a boarding school is being 'so enclosed' for nine months of the year; the advantage is the summers allow one to 'Get Away!'" This he did most summers, traveling extensively in Europe, Asia and South America.

Rob Weedon retired in June of 1993, and settled very happily in Cary, North Carolina, nestled above Lake Lochmere, which he said reminded him of England. He walked regularly and greeted one and all with enthusiasm, living more than a quarter century of contented old age. "I've been lucky," he said recently. "Looking back, it's been a walk around the lake." In the intervening 27 years he would occasionally return to Southborough and St. Mark's for Reunion events, always delighted to see familiar faces and old friends.