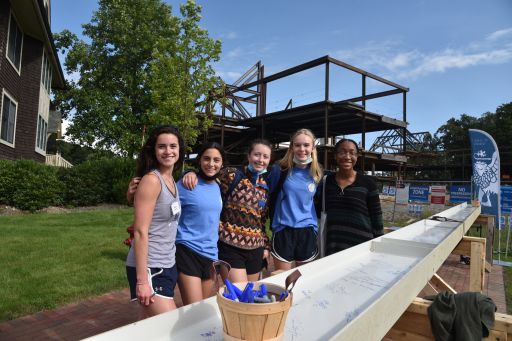 St. Mark's School celebrated a major milestone in the construction of its new residence hall with a topping-off ceremony on Monday, September 13, as the building's final steel beam was raised, marking the completion of structural construction. The beam was signed by students, faculty, staff, and friends of the School last week.

The 90,000-square-foot, $44-million building will open in August 2022, providing housing for approximately 150 students and 12 faculty families. Designed by Goody Clancy, the residence hall is being built by Erland Construction.

To date, 1,734 pieces of steel (weighing a total of 370 tons) and 2,700 cubic yards of concrete have been used in the construction of the building, according to Scott Reed, Erland's project manager for the building. Workers from 11 different trades have worked on the building since March 1, logging more than 16,000 labor hours.

For the ceremony, the final beam was adorned with U.S. and POW/MIA flags, as well as a St. Mark's banner and a spruce tree, an ancient piece of the topping-off tradition that signifies the safe completion of the framing of the structure.

To learn more about the residence hall, click here.

To see photos from the beam-signing event, click here.