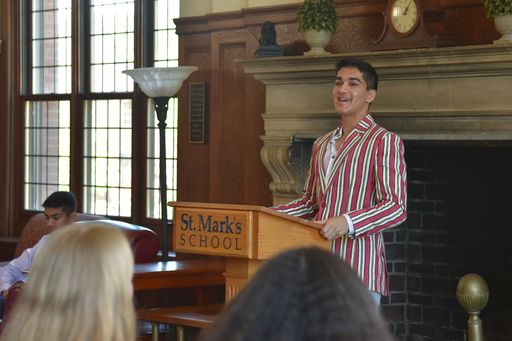 Rohan Kapur '20 of Hopkinton, Mass., has been awarded the 2019 Shen Prize, presented each year to the winner of a public speaking contest among Advanced United States history students on the topic of democracy. The prize is given by Y.L. Shen in honor of his daughters, Ing-ie (Ava) Shen of the Class of 1988, and Ing-Chuan (Judy) Shen of the Class of 1989.

In his speech, titled "Music's Expansion of Democracy," Rohan describes how pop and rock artists in the 1960s expressed feelings of suspicion and disillusionment around the Vietnam War, noting that "Music had never been utilized this way in America's history."

The other two finalists in this year's Shen Prize competition were Aditya Mynampaty '20 of Southborough and Julian Yang '20 of North Chelmsford, Mass.

The full text of Rohan's winning speech is below.

True democracy without freedom of expression is baseless and impossible. Both those who support a government and those becoming disillusioned by it need their voices to be heard or the democracy itself will falter. In the 1960s there was a growing number of these disillusioned citizens due to the Vietnam war and as cultural fissures began to emerge it became difficult to exercise freedom of expression in a country that had begun to inculcate its citizens with almost uniform values. A counter-culture had turned into a quickly growing movement that defied norms, challenged American beliefs, and expanded democracy and the entire culture was enabled by music. "[Y]oung people in the 1960s were deeply suspicious of the government's decision to go into Southeast Asia. As the military's commitment grew and the body counts piled up, many couldn't understand what they were fighting for"[1]. To compound the pain of what felt like a useless war to many, 2.2 million American men were drafted into the army making up 25% of the military force in combat zones. As a growing number of people started to feel disenfranchised musicians spoke to them and brought attention to their plight.

Some folks inherit star spangled eyes
Ooh, they send you down to war, Lord
And when you ask them, "How much should we give?"
Ooh, they only answer More, more, more!

Music had never been utilized this way in America's history. In WWII "bandleaders such as Benny Goodman and U.S.O. entertainers such as Bob Hope reinforced the government's promotion of unwavering patriotism to willing and eager listeners"[2]. While the music was changing along with the deeper cultural expressions at its roots this change was not immediate. Even though there was a growing counter-culture it remained just that - a counter-culture separate from the prevalent American attitude which was one of patriotism and solidarity with the government. This attitude constantly rebuked those who had the courage to become iconoclasts and express what they felt was right. In 1965 "Barry McGuire's 'Eve of Destruction.' a protest song about racism, social injustice, and nuclear annihilation ... [became] the fastest-rising song in history [and] made it to number one in September 1965, after only five weeks. The song finished the year at number thirty-two, despite an organized campaign by the Radical Right to ban the record and several radio stations and ABC television's refusal to play it because it was 'communist propaganda'"[3]. The song's success regardless of its attempted suppression displayed a remarkable expansion of democracy in which McGuire voiced a controversial and almost nihilistic attitude that grew out of intense frustration. Music played an essential role in democracy by expanding freedom of expression beyond the barriers society had set in place. As Michael Kramer observes in "The Republic of Rock," the music of the 1960s and early '70s gave the generation "a sonic framework for thinking, feeling, discussing and dancing out the vexing problems of democratic togetherness and individual liberation." "For Vietnam veterans and those who listen to their stories, the iconic music of the 1960s and early '70s provides access to a truer, deeper story of what Vietnam meant, and continues to mean"[4].