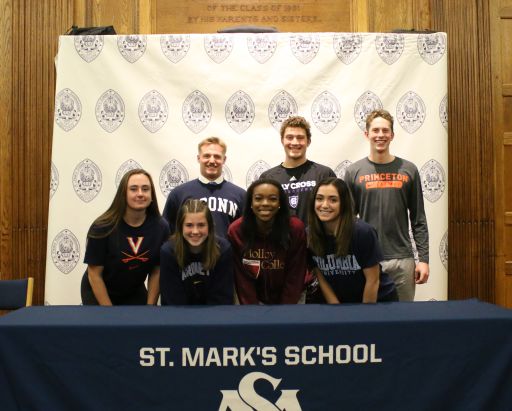 Seven St. Mark's School VI Form students have committed to athletic programs at the college or university level for 2022. The student-athletes, who were recognized at a celebratory event on campus on November 11, are:

Michael Fisher, Westborough, Mass.; Princeton University, hockey
"Michael has developed more than any other hockey player who has entered St. Mark's," says Head Boys' Hockey Coach Carl Corazzini. "Michael is eager to receive feedback and try to implement changes into his game. He has reached the point where NHL scouts are intrigued by his combination of size and skating ability. More than that, Michael has been a leader within the community, acting as a Head Monitor. Michael will continue to excel in the classroom and on the ice at Princeton."

Brianna James, Norfolk, Mass.; Molloy College, basketball
"Brianna has emerged as one of the top guards across New England," reports Head Girls' Basketball Coach Joe Dicruttalo. "Throughout the last two years, she has really worked hard to push herself and those around her in her pursuit of playing college basketball. Brianna has developed her game and her leadership qualities during this time. She has always been a really good athlete, but to watch her progression as a leader, teammate, and person has been the biggest reward for our entire coaching staff. Molloy is getting a tough competitor, an incredible teammate, and a natural-born leader who is sure to excel both on and off the court!"

Levi McAllister, Concord, N.H.; University of Connecticut, baseball
"From the moment he joined the baseball program, it was obvious that Levi is a talented player," says Varsity Baseball Coach Rob Calagione '04. "However, he is also one of the best teammates the program has seen. Levi consistently has raised the bar for the team in practice and always is supportive of his peers. We are sure that he will go on to accomplish great things at UConn."

Ali Miller, Blackstone, Mass.; University of Virginia, rowing
"Ali is a tenacious competitor who brings the hype," says Head Crew Coach Clara Babbott-Ward. "If I were racing against St. Mark's, I would certainly NOT want to look over at the start line and see Ali Miller in the boat next to me! She brings intensity and grit to a sport that demands both, while also encouraging new teammates to believe in themselves and their own capacity to reach a new level."

Dominic Murphy, Worcester, Mass.; College of the Holy Cross, hockey
"Dominic Murphy has been a key contributor to the boys' varsity hockey team since the moment he stepped onto the ice," says Coach Corazzini. "More than that, Dominic is someone who leads by his actions. Dominic is the hardest worker that we have had on and off the ice. The rest of the team has gravitated toward his endless work ethic. Murph will excel in a competitive environment at Holy Cross."

Jackie Zatsiorsky, Shrewsbury, Mass.; Columbia University, rowing
"Not only is Jackie's heart in the sport, but it is also in the team," says Coach Babbott-Ward. "Her passion and care for crew and her teammates is palpable. She is a hard worker and is destined to make any team she's on a faster, and more united one."

Congratulations to all of these outstanding student-athletes!