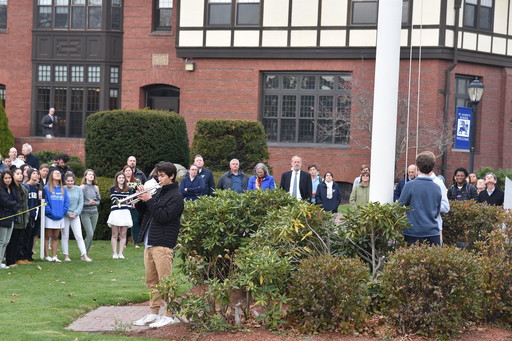 On Monday, November 11, the St. Mark's community honored Veterans Day with a brief ceremony at the School flagpole on Belmont Field.

While Monitors Will Appel '20 and Charles Brookby '20 lowered and then raised the flag, taps was played by Nick Haugen '21. There followed a minute of silence out of respect for those who served and those who sacrificed.

More than 1,000 St. Markers, alumni and faculty, have served in the military since the School's founding. The very first student to arrive on campus in the School's first year—13-year-old Charles Edward Fox from Boston—matriculated at the U.S. Naval Academy after graduating from St. Mark's. He served for 44 years in the Navy, attaining the rank of Rear Admiral.

St. Markers have served in the Spanish-American War, the First World War, the Second World War, Korea, Vietnam, and in more recent conflicts. Sixty-one St. Markers made the supreme sacrifice in military service.

In 1920, Belmont Chapel at St. Mark's was renovated as a memorial to all who served in WWI, and since then St. Mark's has honored all of its veterans each year. In 1919, on the first anniversary of the end of The Great War, President Woodrow Wilson declared November 11—the conflict had ended at the 11th hour of the 11th day of the 11th month, 1918—as Armistice Day (renamed Veterans Day in 1954). November 11 is also a special day for St. Mark's, as it is Founders Day, the birthday of the School's founder, Joseph Burnett. Five of his descendants—St. Markers all—would serve in the military.

St. Mark's mission statement states that the School "prepares its students for lives of leadership and service." That service can take many forms: hence the service gallery in the corridor outside the Hinkle Room. There, along with St. Markers who served in the military, there are examples of graduates serving in public health, public safety, education, government, and more.

On Veterans Day evening, St. Mark's hosted a panel of four local veterans in Taft Hall, who spoke will be about their experience and about the role of service in their life.

At the next St. Mark's evening chapel service, on Monday, November 18, the School will recognize the 100th anniversary of Veterans Day and will again honor its veterans with a special ceremony.