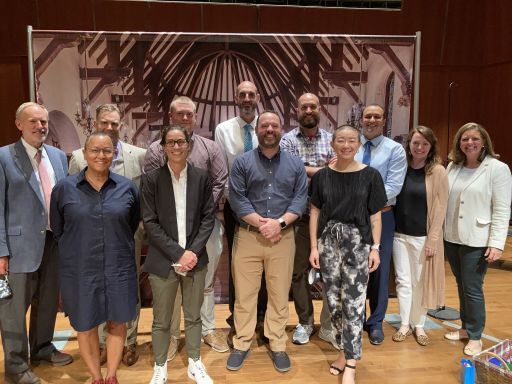 We officially welcome to the Pride:

Nathan (Gabe) Armatas - Science
Gabe arrived at St. Mark's after more than 10 years teaching at both private and public universities. He earned a Ph.D. in chemistry from Syracuse University, where he researched organic-inorganic hybrid materials, in addition to a B.S. in chemistry from St. Lawrence University, where he developed a mass balance model of mercury in Lake Champlain. Gabe is passionate about bringing science to life in the classroom and enjoys hiking with his partner, Kelly, and golden retriever, Sadie.

Luke Chiasson - Interim Assistant Director of Athletics
Luke returned to St. Mark's this year in a new role as interim assistant director of athletics. After graduating from the School in 2015, he completed his B.A. in communication from Virginia Wesleyan University and also spent time working in the Athletic Department at Wellesley College. Luke previously served the School in a number of roles, including: assistant varsity baseball coach in 2019, Coe dorm parent in January 2020, and member of the L.E.O.S. during the 2020-2021 academic year.

Ryan Davey - Classics
Ryan joined the St. Mark's Classics Department after years in the independent school world as a teacher, varsity coach, dormitory head, advisor, and club head at Avon Old Farms, Dexter-Southfield, and the Salisbury School. He graduated from St. Paul's School in Concord, N.H., and received a B.A. in classics from Saint Anselm College as well as a M.Ed. in educational leadership from Southern New Hampshire University. Ryan is passionate about the holistic approach to education at boarding schools, and excited to join the well-established community of St. Mark's with his wife Ryanne (yes, it's pronounced the same as Ryan!), their two daughters, Quinn and Tess, and their dog, Ogie.

Andy Fischer - Math and Science
Andy arrived at St. Mark's after 15 years of teaching in the California Bay Area. He holds a B.S. from Harvey Mudd College and a M.A. from Santa Clara University. As someone who sees the world through a lens of math and physics, Andy is excited to share that perspective with his students. Outside of the classroom, he is passionate about jiu jitsu, rock climbing, and games of all kinds.

Kurt Graham - Math and Science
Kurt worked for 20 years in the financial services industry as a sales executive and key accounts manager. Last year, he taught in the Science Department at Fay School, and previously, he taught science and math at Avon Old Farms. A graduate of the Salisbury School, Kurt earned a B.S. in mathematics and physics from SUNY College at Cortland. He lives off campus in Sudbury with his wife, Megan, their children, Brayden and Madelyn, and their yellow labrador, Dublin.

Emilie Griffin - Modern Languages
Emilie landed at St. Mark's this fall after three years in Treviso, Italy, where she taught the English language while studying Italian. Prior to that, she worked for five years at Brewster Academy in Wolfeboro, N.H. as a French teacher and dorm head. Emilie holds a B.A. in art history from Columbia University and a M.A. in French language and culture from Middlebury College. She lived in France for three years and earned her Diplôme d'aptitude à l'enseignement du français langue étrangère at the Université de Bordeaux III. In her free time, Emilie enjoys doing yoga, reading, baking, and traveling.

Lauren Martin '85- Community Wellness Educator
Lauren graduated from St. Mark's in 1985 and earned a B.A. in sociology from Boston University. She returned to the School last year on a part-time basis, and actively engaged in the residential life program, leadership initiatives, wellness programs, and counseling services, with a focus on supporting students from underrepresented communities. As a wellness educator at the Winsor School for over 20 years, she helped students and adults cultivate deep listening skills and develop the ability to communicate in ways that lead to a heightened sense of purpose. Lauren has served as lead chaperone to a delegation of student participants at the annual NAIS Student Diversity Leadership Conference and has presented at the NAIS People of Color Conference. Now full-time at St. Mark's, she lives on campus with her two sons, Cole and Chance, her daughter Summer, and her labradoodle, Moose.

Jillian Nicks - Director of Experiential Learning, History & Social Sciences, Modern Languages
Jillian arrived at St. Mark's from the Pacific Northwest to work as the Director of Experiential Learning and teach both French and the Global Seminar. At Oregon State University, she played Division I soccer and studied abroad in Lyon, France, during which time she played for the Olympique Lyonnais women's soccer team. Jillian holds a M.A. in French studies from the University of Washington, as well as a M.Ed. from Vanderbilt Peabody College, where she dedicated her capstone projects to understanding and promoting experiential learning. She lives on campus with her partner, Katie; together, they enjoy running, lifting, backpacking, climbing, skiing, and caring for plants.

Maggie Pizzo - Math
Maggie joined the faculty this year as a math teacher after serving as a member of L.E.O.S. during the 2020-2021 academic year. Prior to her arrival at St. Mark's, she worked as a math specialist at Pine Cobble School and as a software engineer at Facebook. Maggie has a B.A. in mathematics and computer science from Dartmouth College, where she was a two-time ultimate frisbee national college champion. In her free time, she loves reading, baking cookies, and losing tennis matches. Maggie lives on campus, where you can find her jogging down Main Street or carrying banana peels to the compost.

Lin Yang - Assistant Director of College Counseling, Science
Lin previously served as an Assistant Director of Admission at her alma mater, Harvey Mudd College, where she received her B.S. in applied physics. Her undergraduate experience afforded her an opportunity to intern with the Office of Admission and also informed her desire to increase diversity, access, and inclusion within the STEM fields. Lin brings her previous teaching and curriculum development experience from Mudd, Explo at Yale, and AstroCamp to teach physics at St. Mark's. She lives on campus and enjoys cooking, reading, and spending time outside.