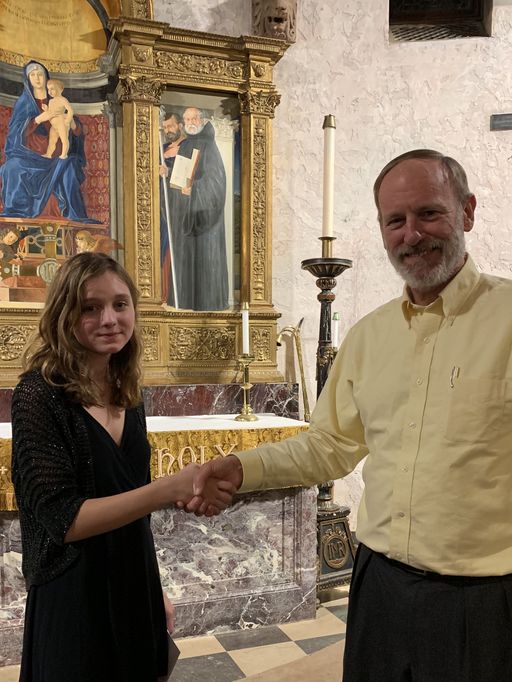 Third Former Sydni Williams has won the 2019 Ely Prize in Public Speaking. Originally given by a member of the Class of 1982 in honor of his mother, the Ely Prize is presented each year to the student who gives the best speech in the Global Seminar Public Speaking Competition. This year's competition featured seven III Form speakers. Faculty members from the History Department served as judges. The prize is formally conferred at Prize Day.

The full text of Sydni's speech is below:

Two months ago, I had never heard this statement before. Two months ago, as I sat in STEM building classroom 252 I courageously decided to write a research paper on violence against women. Two months later, I am different, good-different, different in the way that I appreciate safety and opportunities, and I don't take the minuscule, yet beautiful parts of my life for granted.

I remember when I began the daunting research process, reading articles upon articles about the horrific and deathly crimes perpetrated against females. I constantly found myself completely shocked, horrified by the information that seemed too terrible to be reality.

Did you know that
One in three women across the world is a victim of intimate partner violence. Meaning, ⅓, 33.33 repeating % of women in the world are assaulted by their partner?

Did you know that
Brides in India and China may be killed by their husbands if the dowry their families are forced to pay isn't valuable enough?

Did you know that
All over the world females are killed or driven to suicide for various acts that are considered shameful?

Did you know that
More than 500,000 girls in Latin America are kidnapped, transported, and exploited through sex trafficking?

Did you know that
Young girls are killed before they are five years old because they are deemed less valuable than baby boys?

Well, two months ago, I didn't.

Growing up I viewed the world through trivial problems, through a mask of opportunity and privileges. Getting a bad grade or not making the spring musical were impediments in my simple life. Look around, I attend a beautiful private school with brick walls, squash courts, and ice hockey rinks, I worry about college, and I hide behind luxuries.

This has always been my life.

Reading and writing about violence brought me an escape; it showed me a world beyond Southborough, beyond Massachusetts, beyond the United States, beyond my trivial issues.

I stepped back and saw that the problems I have, those times when I was exhausted, all of those tears I shed for high honors, It was all meaningless. Everything in my life seems insignificant when women are beaten by their partners, date-raped, or kidnapped, when baby girls are killed before they even get a chance to live. All of this violence because of gender, just one more label that changes the reality of every girl in the world.

So, I, as a young woman, was forced to evaluate my own safety. I thought, if innocent women and girls are being abused and assaulted, left with physical injuries and psychological conditions, what makes me safe? How am I exempt from this violence? And, how do I protect myself in this horrific world?

The sudden fear instilled in me was terrifying. I learned that despite my privilege, what I hid behind my entire life, I was not safe from violence. No matter how closely I protected myself, no matter where I was or what I did, I couldn't prevent violence. I would never be absolutely safe.

I need to be aware, I need to know that violence against women is common, it happens everyday, it spans through ages, countries, races, and economic statuses. But everyone needs to know that it is not acceptable, it is not natural, it is awful and life-scaring. It needs to end.

Through my research I found that violence spans from two false societal norms that are taught to many young people in the world. One, women are inferior to men and two, men are superior to women.

These incorrect ideas infused in our world, as common as violence against women, are accepted by men and women alike. However, crimes against women are usually a combination of a superior man exploiting an inferior woman. Every single crime, domestic violence, human trafficking, date-rape, dowry death, honor killings, and female infanticide is born from these two ridiculous, misogynistic, outdated ideas.

I asked myself, and now I ask you, what if we reversed these ideologies? What if we quit teaching boys to be powerful and girls to be submissive? What if we stopped enforcing this culture where violence against women is acceptable and no one acts to stop girls from getting hurt?