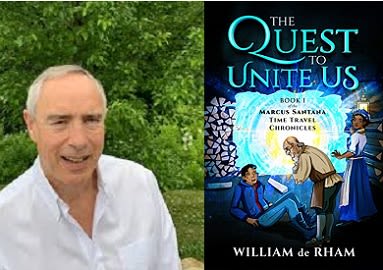 Time travel and history are often paired themes in novels, and one of the best of them comes from the pen of St. Mark's alumnus William de Rham '75. This past summer, de Rham released The Quest to Unite Us: Book I of the Marcus Santana Time Travel Chronicles. Marketed as a young adult novel, de Rham notes that "it is for anyone seeking a tale of adventure that includes the story of how our founding fathers created the Constitution."

And de Rham's estimation has been proven right. The Quest to Unite Us has been the recipient of multiple five-star reviews online and was among the just 10 percent of books by independent authors in 2020 to be selected for featuring by the prestigious Kirkus Reviews, for the past 80-plus years "the most trusted voice in book discovery." The Kirkus feature praised de Rham's prose as "lively and humorous" and described the novel as an "engaging and thoughtful time travel tale."

Readers' Favorite, the fastest growing book review site on the internet, was also among those critics giving five stars to de Rham's opus. Its reviewer describes The Quest to Unite Us as an "intriguing and educational work," citing the author's" unique perspective on American history" and the story's "fast-paced nature." The protagonist Marcus, says Readers' Favorite, "has an urgency in his speech and actions which adds tension to the piece, delivering some very poignant modern perspectives which make us really question certain attitudes and ideas from the time of the founding fathers."

While at St. Mark's, Bill de Rham was an actor, appearing in several Dramatic Club productions (most notably as Mr. Applegate—the Devil himself—in Damn Yankees), receiving the Badger Dramatics Prize his VI Form year. An attorney by profession, de Rham practiced law for many years in Philadelphia. His office was right across the street from historic Independence Hall. "Sometimes," he recalls, "when it was hot and sticky, I'd walk over to the hall. In the evening, I'd see the fireflies, and wonder whether people like Adams, Jefferson, and Franklin saw them as well." It was there he "learned that time travel really is possible."

He did a great deal of research for the book. He began with Carl Van Doren's 1939 biography Benjamin Franklin and for a sense of the city in that era he spent time with Birch's View of Philadelphia (1800). This gave de Rham a then-and-now perspective. "It allowed me to both walk around Philadelphia in this time while walking back in time in old Philadelphia," he relates. "This was important to me in terms of being able to move the characters around in the book."

The book's historical bona fides have been recognized by several reviewers. One, Dr. Keith Arbour, de Rham's St. Mark's classmate, is an independent historian who has written extensively about Benjamin Franklin as a printer. Arbour describes The Quest to Unite Us as "an accurate, deeply engaging work of historical fiction . . . to be enjoyed not only by high school and college students, but homeschoolers and historians working with young people; as well as any adult seeing to learn about the Constitution, its authors, and the era in which they lived."

But it also provides a 21st century perspective, as its hero, young Marcus Santana, when thrown back in time, addresses issues of racism and sexism in history; themes which resonate significantly with contemporary readers. The Quest to Unite Us entertains, surely, but it also raises questions and encourages conversations about the complicated and not always noble qualities of the founding fathers and their world.

A sequel-- Book II of the Marcus Santana Time Travel Chronicles-- is aleady in the works.