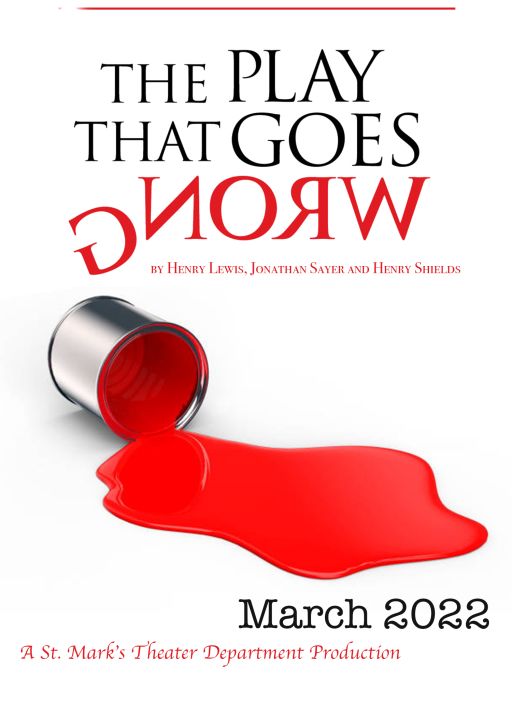 On opening night, Monday, March 7, the St. Mark's Theater Department proudly presented The Play That Goes Wrong by Henry Lewis, Jonathan Sayer, and Henry Shields. With a total of three evening performances in the Black Box Theater, cast members delighted an audience of students, parents, and faculty with this Olivier Award-winning comedy described as an amalgam of Monty Python and Sherlock Holmes. Between an unconscious leading lady, a corpse who can not play dead, and actors who continuously trip over their lines, there was no shortage of laughs.

"My goal in staging The Play That Goes Wrong was to create a performance that brought joy and laughter to not only the audience but the cast and crew," shared St. Mark's Theater Director Chris Kent. "After more than a year without live theater, it was important to me this year to showcase the positive power of plays."

"When I first read the script for The Play That Goes Wrong, I believed it would be impossible to produce at a high school," Kent said. "There was no way I could imagine having a second story set collapse on cue. The physical demands alone on the actors—the numerous pratfalls, sword fights, and stage combat moments—seemed beyond anything we had staged before. It is a true testament to the cast and crew who worked incredibly hard to bring this show to life. Their commitment, skills, and comradery allowed us to bring a tremendous amount of joy to the community."

As evidenced this week by those in attendance at the School's winter play, laughter really is the best medicine.

View a photo gallery of actors during play rehearsals here.