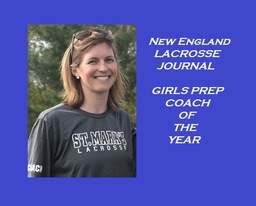 The New England Lacrosse Journal has named St. Mark's Channing Weymouth Warner as Prep Girls Coach of the Year for 2019.

A 2006 graduate of Middlebury College, Warner was a versatile three-sport athlete, competing in field hockey, lacrosse and squash. She was a three-time All-NESCAC performer for the field hockey program and was named to the NFHCA All-Region Team in her junior and senior seasons. In 2003 and 2004, Middlebury field hockey reached the NCAA Championship Game and she was named to the '03 All-Tournament Team. Team captain in her senior season, she also led the NESCAC in assists.

Warner came to St. Mark's in 2013. She coached varsity field hockey for four seasons, posting an overall record of 58-11-5 with two ISL titles and a pair of New England championships. During her tenure as varsity field hockey coach, her team went 41 consecutive games without a loss She has coached girls' varsity lacrosse for six seasons now, with an overall record of 89-19 (good for 2nd best all-time at the School in girls' lacrosse) with an overall winning percentage of .824. Her 147 varsity victories overall is second only to St. Mark's Athletic Hall of Famer DeeDee Anderson among female coaches at the School. Warner also holds the St. Mark's girls' varsity lacrosse program record for victories in a single season with 17, accomplishing that feat twice: in 2015 and 2019. In addition to coaching, she serves as Associate Director of Admission at St. Mark's and as a member of the dormitory faculty.