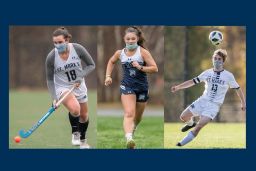 With no in-person competition scheduled against outside opponents this fall, St. Mark's teams and St. Mark's athletes have still managed a productive sports season this autumn.

Like the boys' cross country team (click here for story), St. Mark's girls' cross country has also run virtual races, pitting their times on oval tracks against runners from other schools. Coach Karen Bryant's harriers have also improved their times through hard work and dedication, and have run the St. Mark's course in competition with both each other and themselves individually. Girls that ran good times compared to peers at other schools were Natalie Zaterka '22, Lindsay Davis '21, and Eve Elkins '21. "Natalie was in the top12 of the runners who competed. Lindsay was in the top 20," reported coach Bryant. "We had 21 runners here on campus for much of the season though two went remote midway through. We had 9 girls who were running remotely and we had weekly meetings with them. We did some fun team bonding activities like Team Zumba's over Zoom (so ZOOMba's) that everyone could do, a running scavenger hunt, and a day of playing charades. We also had one of our virtual races where we were joined by the girls' varsity soccer team. Many of the girls ran in the Students for Sustainability fund raiser."

During the week leading up to what would have been Groton weekend, the week before Thanksgiving break, every fall team was highlighted in intrasquad scrimmages. "We had officials," reported Associate Athletic Director Lauren Ames. "Varsity games were filmed and we wore our uniforms. It was awesome!"

Boys' varsity soccer had lively practices and played very well in their scrimmage, Blue vs. White. Girls' varsity soccer's intrasquad "game" was a tight match for the entire contest. For GV soccer, it was a tight match the entire game. With 2:35 minutes left, senior captain Brooke Farrell made her way down the field and fired a long-range shot in the top left corner of the net. Her team (the Blue team on Friday, November 13) won 1-0. "It was a fitting way to end the season," said coach Ames. "The girls were phenomenal this season, showing up each day with a positive attitude, willingness to improve, and desire to compete hard."

At the final virtual School Meeting before Thanksgiving vacation, photos and video of this autumn's St. Mark's athletic action were shared. Onscreen, individual players spoke eloquently about what their sport meant to them during difficult times. As the pictures demonstrated, health and safety were prioritized and the experiences were positive. Given the challenges of COVID-era sports, it was a uniquely successful season for St. Mark's teams.