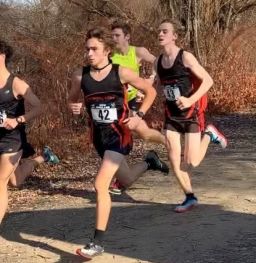 St. Mark's V Former Josh Bergers was the top high school runner in the annual U.S. Track and Field (USATF) New England championship cross country race, held at Mine Falls Park in Nashua, New Hampshire on the Saturday before Thanksgiving. Bergers, just 17, came in 11th out of 87 runners in the men's event. The top 10 finishers ranged in age from 20 to 28.

With a time of 15:37 over the 5K course, Josh led the dozen or so high-school-age runners that day. He represented the USATF Emerging Elites Club of New England. With one more season to go as a St. Mark's harrier, Bergers is already one of the finest cross country runners in the history of the School, right up there with Liam Monheim '16 (who still holds the record for the St. Mark's course of 15:54) and the legendary John Pickering '74, still the only St. Marker to win the individual championship of the New England Private School League (later the ISL). Pickering was the recipient of the first-ever varsity letter ever awarded for cross country at St. Mark's and he still holds the School record for the mile (on a track) at 4:35. Pickering is the only St. Mark's harrier in the School's Athletic Hall of Fame.

Josh Bergers burst on the St. Mark's cross country scene as a III Former in the fall of 2018, when he was named the team's most improved runner and earned All-ISL recognition. The following autumn he was again an All-ISL selection and he was the team's Most Valuable runner. The COVID-impacted 2020 season saw limited opportunity (and no All-ISL honorees in any sport), but in a virtual 5K race, timed on an oval track, against three other New England schools, Josh ran a 15:33—easily the best 5K time by a St. Mark's harrier in the two-decade-plus memory of longtime coach David Lyons.