Ben Bradlee '39: A Historically Significant Life of Consequence
I have experienced a distinct sense of déjà vu over the last couple of months as I have watched, listened to, and read about events relating to the impeachment of Donald Trump. My experience of these events brings back a flood of memories about events in 1973 and 1974, my VI Form year at St. Mark's. It was at that time that another impeachment inquiry, sparked by what is known as Watergate, was gripping the country. Read more.

St. Mark's Saturdays
As a reminder, Saturday courses meet from 8:40 to 11:30 a.m. Those marking their calendars for the winter season should note the following Saturday course meeting days: January 11, January 25, January 18, February 1, February 8, February 22, and March 1.

Close of Semester One Approaching
While our winter break is still a recent memory, the close of Semester One is a fast-approaching reality for students and faculty. With the close of a term, we traditionally see an uptick in workloads and stress, and remind students to make good use of their advisors, teachers, peer tutors, prefects, and the wealth of other support resources that they have available to them here on campus. This year, we are also making a concerted push to remind students of our expectations around academic honesty, and the importance of submitting their own best work.

Window Two Grade Posting
Below is the schedule for the upcoming grading period and the availability of grades in the parent portal. As a reminder, faculty compose narrative comments to accompany grades at the close of Window One and Window Three, and advisor letters as a summative report of student progress at the close of Semester One and Semester Two.

Advisor letters will again be delivered electronically. More information about access to advisor letters is forthcoming, with an anticipated delivery date in early February.

Second Semester Add/Drop
The second semester is soon approaching. While we aim for our course advising and fall add/drop process to solidify the correct slate of courses for the second semester, we recognize that in some cases adjustments will be necessary to the second-semester course load. The add/drop period for second-semester courses ends on Friday, January 24. Please be in touch with your student's advisor if you have any questions.

Robotics News: Team 3566, Gone Fishin'
The season for St. Mark's FIRST Robotics Team 3566, Gone Fishin', has officially started! During our first practice of 2020 we watched the FIRST Infinite Recharge official video and began to discuss our plans for this season. We have begun to work on prototypes for our robot, teach new members about last year's robot, and fix our vision system from last year. In the upcoming week, we hope to finish our prototypes and test them. We are starting the season out strong and are ready for the rest of the season. 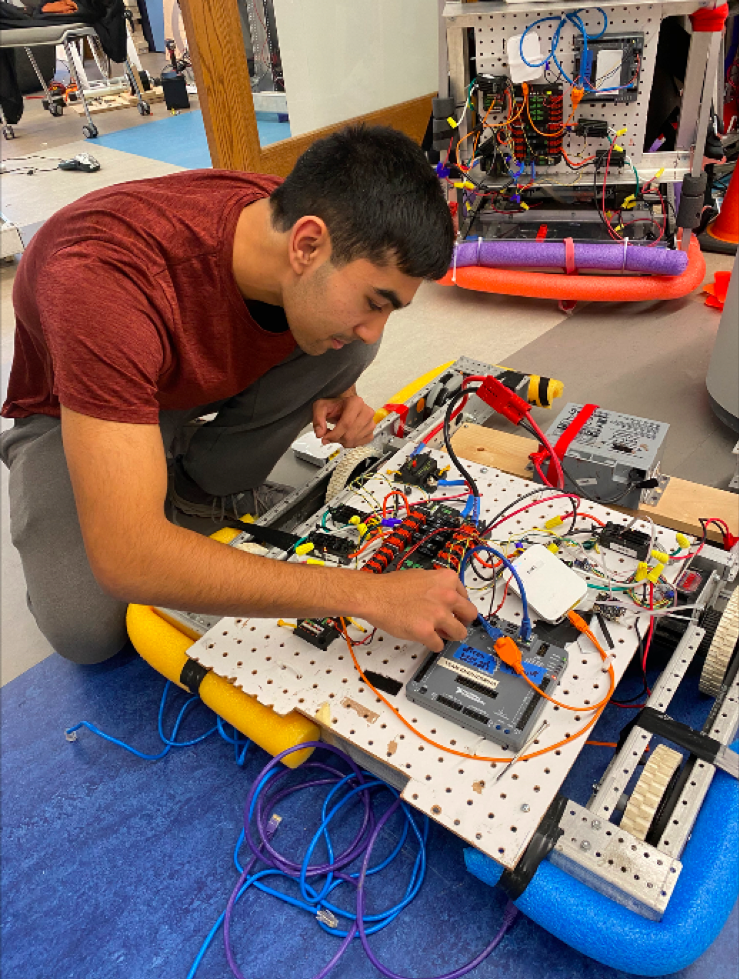 VI Form Recognition Advertisements
Looking for a way to let your graduating student know you're proud of them? A family interested in celebrating their graduating VI Former can purchase a recognition advertisement here. With this link, you can design and pay for your ad. The cost is $100 for 1/4 page, $200 for 1/2 page, and $400 for a full page. The deadline to complete your ad is January 31. If you experience any issues or have questions about your ad, please contact our Jostens yearbook representative, Chris Spelman.

This year, we will use an opt-out system for yearbook sales. If you or your child(ren) DO NOT want a copy of the yearbook, please directly email Ms. Starry Zhu or Ms. Lauren Kelly by January 31. We will also make announcements at School Meeting and remind students via email.

Alumnus a Major Part of Golden Globe-Winning TV Drama
Congratulations to Nicholas Braun '06. At this year's Golden Globes, Succession, the HBO show in which he plays a key role, took home the top prize as Best Television Series-Drama. Learn More.

What's up this weekend? Check it out here.

December Highlights
Team of the Week: JV Girls' Hockey
The JV girls' hockey team's win against Pomfret was a big turnaround from their Milton game. Although both were wins, the Lions played as a team, passing the puck around and getting a lot of good shooting opportunities. The St. Mark's second line with Sarah Lammert '21, Caroline Sullivan '22, and Nashua Poreda '22 really stepped up and modeled hard work and passing the puck, which motivated all the other lines to step up and play better. Even the fourth and fifth lines were passing the puck! Sullivan was the most inspirational player to watch in the game from start to finish. Grace Zawadzki '20 almost scored a goal in the second game of her career. Finally, Payton Kober '20 scored her first goal.

Holiday Tournament Highlights
Varsity Boys' Basketball
The varsity boys' basketball team entered winter break with an impressive 3-0 record in the Huckins-Rouse Tournament at Middlesex School. Defeating Portsmouth Abbey, BB&N, and earning a thrilling overtime win against Holderness. The Lions were led throughout the tournament by Bobby Sommers '20, who average 24.6 points per game, including seven three-pointers in the win against Holderness. Robert Taylor '21 was also impressive, throwing down several monster dunks, while Jake Verny '22 and Austin Hunt '23 were consistent scoring options the entire tournament. During the team's comeback overtime win against Holderness, Ethan Karabanow '22 knocked down a big corner three-pointer to send the game into overtime. Sommers was also named to the All-Tournament team.

Varsity Girls' Basketball
The varsity girls' basketball team defeated Middlesex in the consolation game of the Pingree Tournament before winter break. The Lions bounced back after Friday's game, with the Lions' captain trio of Ava Limonciello '20, Brooke Farrell '21, and Niki Noel '20 leading the way. Farrell scored a career-high 20 points and season-high five assists, five steals, and three rebounds in the victory. Limonciello played her best game of the season so far, scoring 15 points, adding six steals, four rebounds, and three assists. Noel added 10 points and eight rebounds and was named to the All-Tournament team, averaging nine points and 12.5 rebounds in the tournament. Finally, Megan Miantsoko '21 scored six points and grabbed a career-high 10 rebounds in the win over the Zebras.

Varsity Wrestling
Several St. Mark's wrestlers competed in the Battle on the Bay wrestling tournament at Tabor Academy before break. Luis Perez '20 finished in second place, taking down the #2 and #3 seeds. Louis Lyons '20 only lost one match on the day to the #1 seed from Brunswick. He won the rest of his matches taking fifth place at the tournament.

Varsity Boys' Hockey
The varsity boys' hockey team went 2-0-1 during the annual Barber Tournament. On Friday, the Lions earned a 9-1 win over Portsmouth Abbey. Trevor O'Brien '21 and Danny Ciccarello '20 both recorded two goals and two assists each in the victory. On Saturday morning against Kents Hill, Ciccarello picked up a goal and added two assists in a 4-2 win over the Huskies. Finally, in the championship game on Saturday afternoon, St. Mark's and The Hill School battled to a 5-5 tie. Ciccarello scored two goals and two assists in the game.

Varsity Girls' Hockey
The varsity girls' hockey team competed in the Harrington Tournament before winter break, playing four total games. On Friday, Avery McInerny '22 scored two goals for the Lions in a close game against Westminster. On Saturday against Nobles, Erin Murray '21 held the Bulldogs scoreless through two periods and ended the game with 29 saves. Lauren Tolve '21 added a gritty goal late in the game against Nobles. Finally, on Sunday against Milton, Alicia Souliotis '21 scored a few minutes into the game, while Lilli Armstrong '21 scored the game-winning goal in overtime off a Grace Gibbons '20 assist. St. Mark's won 2-1.

Donations can still be dropped off and given to Caitlin Kosow (caitlinkosow@stmarksschool.org) at St. Mark's School, 25 Marlboro Road, Southborough, MA 01772. Contact Casino Night Chair, Kelly Requadt, at kellyrequadt@yahoo.com for more information about helping out. Thanks for your support!

Topic: Wellness including the challenges students (especially new students) face this time of year (e.g. transitions around holidays and school breaks especially for boarders, first exam periods, the novelty of new environment is wearing off); resources St. Mark's offers to help students navigate difficulties; and advice on how parents can help (e.g. communicating with the school, communicating with their child).

For more information, contact Gage Gillis in the Advancement Office at gagegillis@stmarksschool.org.

Parent Chats
Parent chats are held with John Warren from 11:30 a.m. to 1:00 p.m. at Choate House. They will be livestreamed for those unable to attend. Parents will be notified when the livestream link becomes available.

Parent/Faculty/Staff Book Club: Wednesday, February 5, 1:30-2:30 p.m.
Our next book club will be held at St. Mark's in Room 248 of the Center. If you are in the area, please stop by for book discussion, a bit of socializing, and a light snack. We'll discuss Stir: My Broken Brain and the Meals That Brought Me Home by Jessica Fechtor.

Read any interesting books over the holidays? If so, we'd love to know the titles, especially if you particularly enjoyed them and would recommend them. Please drop us a line if you have any!

Not in the area, but have a suggestion for the group? Book suggestions are always welcome and can be submitted to Joanne Flathers P'15, '19, '21, '21 at joanne@flathersfamily.net or Laurie Kalapinski at lauriekalapinski@stmarksschool.org.